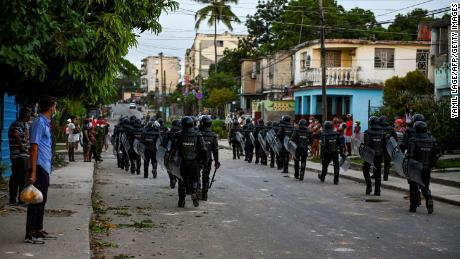 Cubans are used to being endlessly patient and inventive in the face of an often dysfunctional daily existence and crushing shortages.

But over the past several years that ability to overcome misfortune has been replaced by a stone-faced reality that life has become as difficult as during any point in their embattled lives.

Relations with the United States often act as a barometer for how optimistically or pessimistically Cubans view their future. When then-President Barack Obama famously declared during his 2016 trip to Havana that he had come “to bury the last remnants of the Cold War in the Americas,” people across the island breathed a sigh of relief.

They hoped a long-awaited easing of tensions with Washington might lead to their own government relaxing some of the endless restrictions on life in the communist-run island.

But less than a year after Obama’s visit, Donald Trump took office and abruptly disinterred decades of Cold War animosity between the two countries.

Trump limited the ability of US citizens to visit the island, canceled US cruise travel to Cuba, forced out the one US-run hotel, cut off the billions of dollars in yearly remittances many Cuban Americans send back home and returned Cuba to the list of countries that sponsor state terrorism.

As Cubans reeled from the increased sanctions and their own increasingly wary government’s clampdown, the pandemic struck.

Tourism came to a screeching halt as the island went into total lockdown and Cubans abroad could no longer send medicines and money via “mules,” what Cubans call the people who ferry items into the island in suitcases.

Food lines — already a daily ritual for many Cubans — wrapped around blocks and forced people to congregate as the number of coronavirus cases climbed higher and higher.

For many Cubans the choice was one between going hungry and risking infection.

“Every day there are people out here for whatever there is, some days you don’t even know what products they are going to be selling,” said Rachel, who asked her last name not be used, while she waited in a line for chicken. “You have to be out here if you want to have food.”

The government of President Miguel Diaz-Canel, the first head of state not named Castro since the revolution took power more than six decades ago, gave frequent updates on the economic crisis but even top officials seemed to realize the presentations were not going over well with an increasingly frustrated populace.

Then on Sunday, something appeared to break in Cubans as protests rolled across the island from city to city.

In San Antonio de los Banos, a city of about 46,000 people, to the west of Havana, hundreds of Cubans took to the streets, fed up after nearly a week of electricity cuts during the sweltering July heat.

“Everyone was in the streets,” one resident of the city who did not want to be named told CNN. “They have gone six days with only 12 hours of power each day. That was one of the things that blew this up.”

Soon images of the remarkable protest and others across the island were being shared widely on social media. Cubans began taking to the streets in the largest mass demonstration in decades, perhaps since Fidel Castro’s revolution began in 1953.

In Havana, hundreds of protesters in front of lines of police chanted “liberty” and “fatherland and life,” the title of a new song calling for change in Cuba.

“Repression is all we have,” one protester told CNN.

Even though anti-government demonstrations are prohibited in Cuba, the protesters seemed to not fear arrest.

The government responded by sending in counter-protesters, some who chanted “I am Fidel!”

Police dragged off scores of the protesters, forcibly detaining them.

Videos shared on social media showed demonstrators pelting police cars with rocks and even overturning several of the vehicles.

By late Sunday, heavily armed police and special forces troops regained control of the streets in Havana and other parts of Cuba.

Both the US and Cuban governments seemed stunned by the unprecedented demonstrations.

“I don’t think we’ve seen anything like this protest for a long, long time, quite frankly ever,” said President Joe Biden, whose administration so far has been reluctant to lift the punishing Trump-era sanctions.
Biden warned the Cuban government not to crack down on the newly defiant Cubans.

But on Monday, at another lengthy televised government meeting, Cuban President Diaz-Canel said the protesters were criminals.

Cuban government officials on Monday said there had been no more protests as they enacted an internet blackout that prevented Cubans from sharing the images that had sparked the demonstrations in the first place.

It’s anyone guess how long the uneasy peace will last.

The government may have regained control but the underlying conditions that led Cubans to risk everything and call for change are not going anywhere.

‘COVID is a warning that much worse lies in store’: Alarm raised ahead of biggest climate report since 2013

Russian Navy Can Carry Out “Unpreventable Strike” If Needed: Putin