The European Commission has said it “will not agree to a renegotiation” of the Northern Ireland Protocol after the UK government demanded that “significant changes” be made.

EU Commission Vice-President Maros Sefcovic said the bloc are “ready to continue to seek creative solutions within the framework of the protocol” but will not reopen negotiations of the entire mechanism.

His comments came as Brexit minister Lord Frost said that the UK and the EU “cannot go on as we are” with the current Northern Ireland Protocol arrangements.

Lord Frost unveiled proposals from the UK government that he said will bring a “new balance” to the protocol, as the UK looks to overhaul post-Brexit trading arrangements between Great Britain and Northern Ireland to ensure the smooth movement of goods.

The UK’s Brexit minister said it will ensure “goods circulate much more freely within the UK customs territory while ensuring that full processes are applied to goods destined for the EU”.

According to the government’s command paper, the plan includes:

Speaking on Wednesday, Lord Frost admitted that the burdens imposed by the mechanism “have been a source of considerable and ongoing disruption to lives and livelihoods”.

However, the Brexit minister stopped short of entirely ripping up the document or calling for the Article 16 provision – which enables either the UK or the EU to suspend part of the arrangements in extreme circumstances – to be triggered.

Lord Frost said “it is clear that the circumstances exist to justify the use of Article 16” but that “it is not the right moment to do so”.

He added: “Instead, we see an opportunity to proceed differently, to find a new path, to seek to agree with the EU through negotiations a new balance in our arrangements covering Northern Ireland to the benefit of all.”

On a visit to Belfast in 2019, Boris Johnson said there was “no question” of checks on goods crossing from Great Britain to Northern Ireland.

But he had already agreed to checks a month earlier when he and his then Irish counterpart Leo Varadkar were negotiating the Northern Ireland Protocol.

Fast forward 18 months and the UK government is effectively admitting that the checks were required by taking unilateral action to abandon most of them.

If there is no effective Irish Sea border, how will the EU protect its Single Market without resurrecting the contentious prospect of a land border?

They said it would be easy to avoid a hard border but five years after the UK voted for Brexit, there is still no solution.

The longer the EU and UK lock horns over Northern Ireland, the more destabilising it is for relationships at the heart of the peace process.

Making a statement simultaneously in the House of Commons, Mr Lewis said: “It’s now the time to work to establish a new balance, which both the UK and EU can invest in, to provide a platform for peace and prosperity in Northern Ireland and allow us to set out on a new path of partnership with the EU.

“We are today setting out an approach that we believe can do just that.

“We urge the EU to look at it with fresh eyes and work with us to seize this opportunity and put our relations on a better footing. We stand ready to deliver the brighter future that is within reach.”

But the EU said renegotiation is not on the table.

“We take note of the statement made by Lord Frost today,” Mr Sefcovic said.

“We will continue to engage with the UK, also on the suggestions made today. We are ready to continue to seek creative solutions, within the framework of the protocol, in the interest of all communities in Northern Ireland. However, we will not agree to a renegotiation of the protocol.”

Ireland’s Minister for European Affairs Thomas Bryne agreed, adding: “We don’t want to renegotiate the protocol, it’s there. But within the protocol there are creative ways of doing things.”

But others were more positive about the UK government’s announcement, with DUP leader Sir Jeffrey Donaldson describing it as a “significant step”, adding that a “proper renegotiation” of the protocol is needed.

“The prime minister must continue at pace to remove the Irish Sea Border, which is fracturing the economic and constitutional integrity of the United Kingdom,” Sir Jeffrey told the Commons. 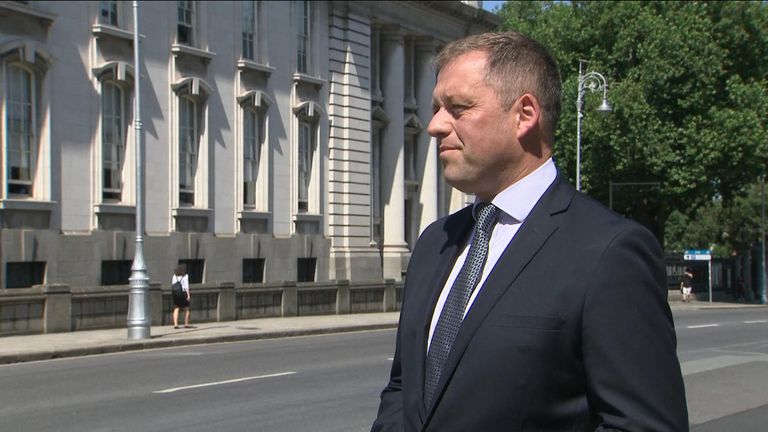 ‘We don’t want to renegotiate the NI Protocol’

Angela McGowan, director of CBI Northern Ireland Director, said “businesses are exasperated that the protocol continues to dominate the headlines with no end in sight”.

She added that “solutions need to be agreed urgently to unlock investment and give Northern Ireland’s businesses and households the certainty they need and deserve”.