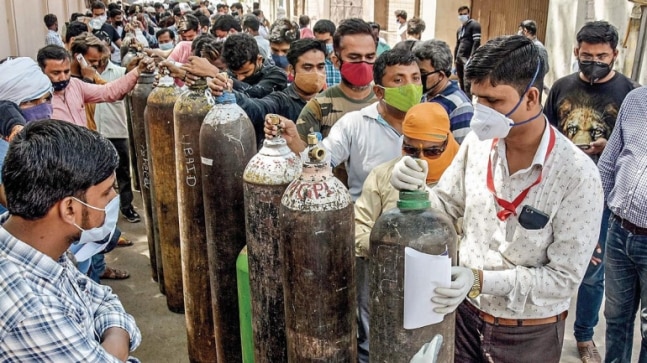 The alarming statistics sparked a series of questions—most importantly, what had triggered the second wave—so that the knowledge could be used to prevent a repeat of such an unprecedented crisis. The July study by ICMR (the Indian Council of Medical Research) says the Delta variant of the virus led to 80 per cent of all ‘breakthrough infections’ (people getting infected even after vaccination) in the second wave. But respondents of the india today Mood of the Nation (MOTN) survey believe other reasons were more to blame. While 12 per cent said new strains of the virus had caused the second wave, 27 per cent held large religious gatherings and election rallies responsible. Another 26 per cent felt the wave was caused by people’s Covid-inappropriate behaviour while 32 per cent said it was a result of all three factors.

Indeed, there is reason to believe that a new Covid strain alone was not responsible for the surge in cases in April-May. A survey conducted by the Union ministry of health and family welfare (MoHFW) in May in 25 cities noted that only 50 per cent of respondents wore masks; worse still, just 14 per cent wore masks correctly. Research has confirmed that masks lower the transmission of Covid, including the Delta variant, by 70-90 per cent. Thus, even if the new strain was present in India, its spread was hastened by the poor adherence to social distancing norms and masking up.

The impact of the second wave was far harsher than the first wave last year. With many more Covid patients requiring oxygen support, the country’s healthcare system was literally left gasping. For instance, on April 20, Delhi’s largest hospitals announced they were left with less than 24 hours of medical oxygen supply, which put in peril the lives of scores of patients. The situation hadn’t improved even nine days later, with one hospital in the national capital raising an alarm that it barely had a few hours of oxygen left.

On April 20, Bengaluru became the second city, after Pune, to cross 100,000 active cases. Images of bodies piling up at crematoriums and graveyards across the country circulated on social media, shaking public confidence. While 55 per cent of MOTN respondents felt their respective state governments’ handling of the pandemic was outstanding/good, it was significantly down from the 70 per cent in the MOTN January 2021 survey. 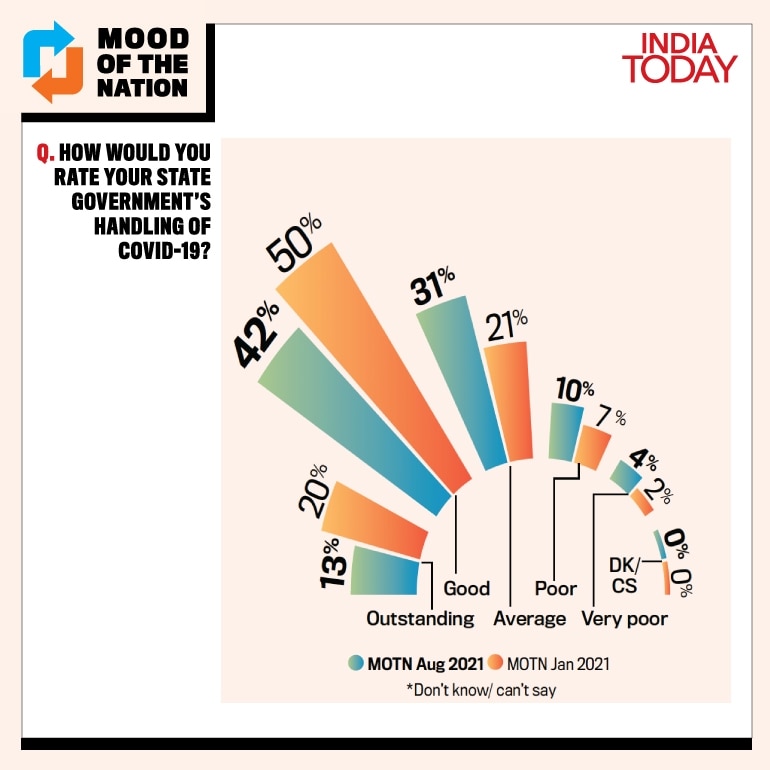 Some states, though, handled the second wave better. Assam, for example, brought down its positivity rate from a high 10 per cent (WHO recommendation is under 5 per cent) on May 2 to 1.5 per cent in July through improved contact tracing, extensive testing, strict quarantines and community involvement. The MOTN survey ranked it second best in the handling of the pandemic (72 per cent satisfied respondents), losing the top spot to Odisha (73 per cent) by a whisker. Odisha registered one of the lowest surges during the second wave.

Tamil Nadu ranked fourth, with 62 per cent satisfied with the government’s handling of the Covid situation, as against 43 per cent in the MOTN January 2021 survey. In fact, Chennai brought down the total positive cases by 70 per cent in just three weeks—from 7,564 cases on May 12 to 2,217 on June 2. The city owes its success to the state government setting up dedicated Covid war rooms to focus on contact tracing, testing and treatment.

While 44 per cent of respondents held both the Centre and states responsible for people’s sufferings during the second wave, 13 per cent squarely blamed the central government and 10 per cent the state governments. Despite getting over a year’s time to prepare, neither the Centre nor the states seem to have had adequately ramped up bed capacity and oxygen supplies or improved tracking and testing, all of which could have helped reduce the intensity of the wave. The second wave had an equally crippling impact on livelihoods. According to the Centre for Monitoring Indian Economy (CMIE), over 10 million Indians lost their jobs and around 97 per cent of households in the country suffered income loss. The MOTN survey also paints a grim picture, with 69 per cent of respondents reporting a drop in income (the highest since MOTN August 2020) and 17 per cent saying they had suffered business or job losses. Only 3 per cent said their income had increased. An overwhelming number of respondents showed lack of faith in the official Covid data—71 per cent believe the government underreported the number of infections and deaths. ICMR’s latest national sero survey, whose findings were declared in July, says 11 states had reported a seropositivity of over 75 per cent. Madhya Pradesh topped with 79 per cent seropositivity, followed by Rajasthan (76 per cent) and Bihar (75 per cent). This does not sync with the official count of Covid infections. While the first Covid wave had rattled the country, the second one left permanent scars. The trauma of being unable to access basic medical supplies and care as well as the economic hardship and loss of lives will remain etched in public memory for long. Even though more than half the respondents expressed overall satisfaction with how the governments had dealt with the situation, the numbers have drastically fallen over the past one year—a clear call for greater government accountability and preparedness in the face of a potential third wave.