Symbols of the socialist health care system pioneered by Fidel Castro, doctors and nurses are usually praised as “heroes in white coats” by the island’s state-run media.

In recent years Cuban health care workers have also become a key generator of hard currency for the communist-run government, which sells their services to countries that need doctors.

But as Cuba deals with shortages of medicines and oxygen and hospitals are overwhelmed with surging coronavirus cases, tensions between the government and health care workers –who are required to work for the state– have boiled over.

During a visit in August to the hard-hit province of Cienfuegos, Prime Minister Manuel Marrero Cruz blamed health care workers’ lack of discipline and “errors” for the breakdown in medical services.

Marrero acknowledged residents had complained about a lack of medicines as well but said “they are less than the complaints of mistreatment, of neglect or that [doctors] don’t make visits. That’s incredible!”

The comments ignited a firestorm among health care workers who have borne the brunt of the pandemic in Cuba, often while having to purchase their own protective gear and explain to patients sick with Covid why hospitals have run out of basic medicines and beds.

The Cuban government blames the US embargo for breakdowns in the healthcare system, but critics point out that the same US economic sanctions do not prevent the government from investing in a string of shiny new hotels. 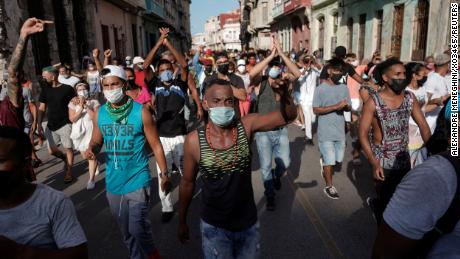 “We just ask that they tell the truth,” said Dr. Rosell Alberteris, in a video posted online. “We only demand the supplies to treat our patients with dignity and decorum.”

“We want to keep working, we want to keep saving lives,” said Dr. Daily Almaguer in the video. “We are not responsible for the sanitary collapse in our country.”

At least 39 health care workers have uploaded videos from Holguín, a city of nearly 300,000 people close to the small town where both Fidel and Raul Castro were born, complaining of abysmal conditions in hospitals overrun by Covid.

Some of the doctors recorded videos from inside their hospitals, talking barely in a whisper as they slammed their government’s failures.

More Cuban doctors and nurses on social media from all over the island have expressed their support for the online protest, which is all the more remarkable as the Cuban government on Tuesday announced draconian new measures that prohibited “fake news” and postings that damage the island’s “prestige.”

“We aren’t afraid of the pandemic, we are afraid of the government,” Dr. Rafael Alejandro Fuentes Sanchez said in another video posted online. “How they could interpret that we have come out to demand our rights and the people’s right to receive good medical attention.”

Cuba’s main newspaper, the Communist-party daily Granma said the health workers were being used in “new enemy campaigns” and being turned into spokespeople for an “anti-Cuban offensive.”

Cuban officials also looked to defuse the confrontation with their frontline workers as the island’s battered health care system confronts the most precarious moment of the pandemic to date.

“Every time it seems we are tired, exhausted, beaten from this long period of the pandemic,” wrote Cuban President Miguel Diaz-Canel on Twitter. “We think about how much our doctors and nurses have given.”

Officials have begun to bring back brigades of Cuban health care workers from postings abroad and admit that the situation is far worse than the island’s statistics let on. 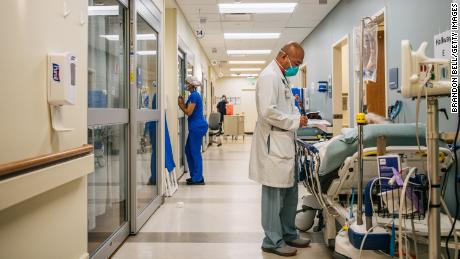 Amidst a shortage in tests, Cuban Health Minister José Angel Portal Miranda told the state-run Invasor newspaper that only people who had a positive Covid result at the time of death are counted as having died of the coronavirus.

“Not all the fatalities are able to take or obtain a PCR result,” the newspaper concluded. “Death sometimes arrives first.”

Magdiel Jorge Castro told CNN his grandfather died on Wednesday after being sent home from the hospital in Holguín where he was unable to receive results from a Covid test he took days earlier. Oxygen had run out in the hospital.

“The funeral services are collapsed. There aren’t any coffins,” Castro said. “My family was in despair to have a deceased person for 15 hours in their bed in the tropical heat. The funeral home said there were 16 cases like his, people without a place to be buried.”

Wonders, and Horrors, Drawn From Boyhood in a War Zone

At McKinsey, Widespread Furor Over Work With Planet’s Biggest Polluters