Daya Shankar Singh’s comments: BSP MLA says there is something wrong with his DNA, ‘I think he is an illegitimate child’ 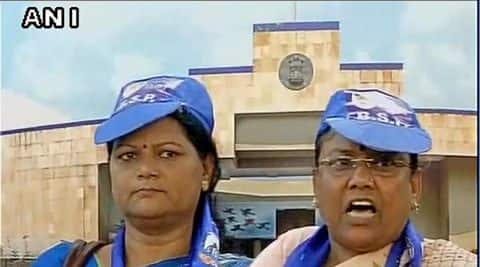 “There’s something wrong with Daya Shankar Singh’s DNA, I think he is an illegitimate child,” she said.

Chaudhary added, “What Daya Shankar Singh said about Mayawati, I think his family is like that.”

Singh on Wednesday compared Mayawati to a prostitute at a felicitation organised by BJP workers in his honour. He alleged that Mayawati has been taking money in exchange for party tickets.

The remark sparked huge protests in the Parliament, with Mayawati saying “his (Singh’s) remarks apply for his sister and daughter and not for me. The whole country will not forgive BJP… people will come on the streets”.

Watch Video: The Implications Of Dayashankar’s Remarks On Mayawati That Left The BJP Red-Faced

BSP workers today held protests against Singh in Hazratganj, demanding his arrest. A case was registered late last night in Hazratganj under SC/ST Act against Singh. Police today raided Singh’s house in Ballia, but he was found to be missing.

The BJP suspended Singh for six years and sacked him from the party’s Uttar Pradesh unit vice-president post. Union Finance Minister Arun Jaitley express regret at Singh’s comments and said the BJP stands with Mayawati on the issue.