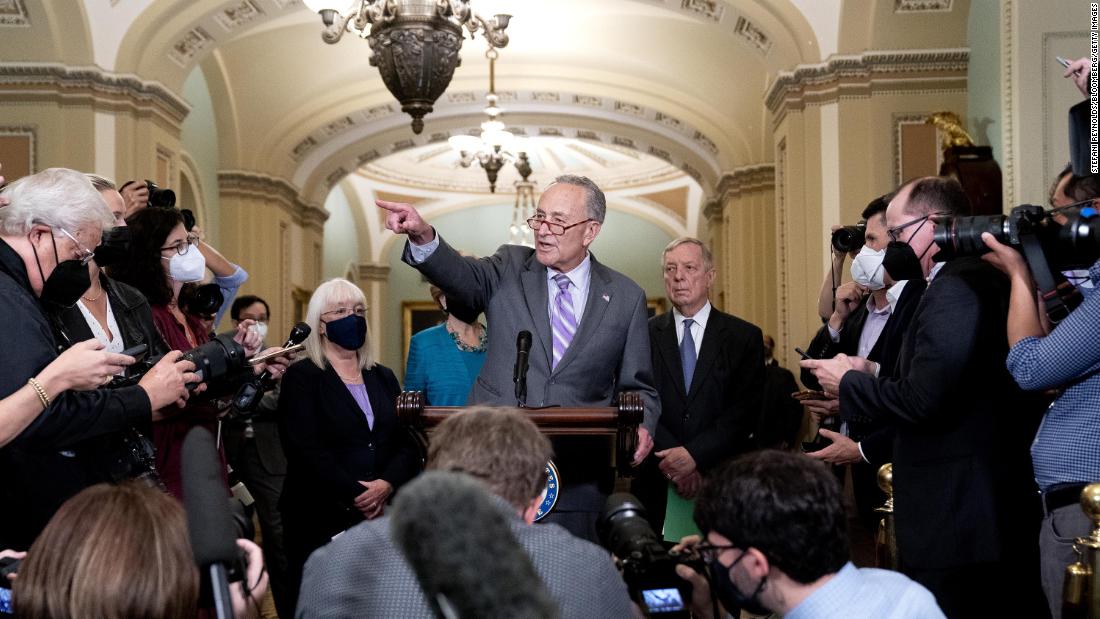 One of the fiercest opponents to changing the filibuster rules, West Virginia Sen. Joe Manchin, insisted on Tuesday that Congress wouldn’t let the country default, though it’s still highly uncertain if he and 49 other Democrats would vote to change the rules even temporarily. President Joe Biden called the prospect of Democrats adopting a carve out of the filibuster rules “a real possibility” on Tuesday.

One of the fiercest opponents to changing the filibuster rules, West Virginia Sen. Joe Manchin, insisted on Tuesday that Congress wouldn’t let the country default, though it’s still highly uncertain if he and 49 other Democrats would vote to change the rules even temporarily.

Senate Democrats are also discussing whether the White House can use administrative procedures to avoid default, an issue that could be the subject of a court fight if Biden were to greenlight that procedure.

At a caucus lunch on Tuesday, Democrats discussed an array of options on how to proceed next given that Republicans are planning to filibuster the debt ceiling hike on Wednesday. That will deny Democrats the 60 votes needed to proceed toward a final up-or-down vote in the evenly divided Senate.

With time of the essence before an October 18 deadline, Democrats at the lunch roundly rejected GOP demands to go through a time-consuming procedure known as “budget reconciliation,” arguing they should not heed the calls of Senate GOP leader Mitch McConnell and the politically charged series of amendment votes they would be forced to endure through that complicated process.

Instead, they discussed a series of other Plan B options, including Biden using authority under the 14th Amendment that says the validity of public debt “shall not be questioned,” the sources said. Democrats fully recognized this idea is untested in the courts, but also said Republicans would risk being blamed for putting the full faith and credit of the United States in jeopardy if they sued over such a move.

The other option discussed at lunch Tuesday was employing a complex parliamentary procedure — known on Capitol Hill as the nuclear option — that would essentially nullify the 60-vote requirement to break a filibuster to raise the debt ceiling, allowing a simple majority to do so instead. The issue also came up at a private lunch last Thursday, the sources said, and Democrats said the idea of making a temporary, one-time change in the rule was also being considered.

“We can carve out a one-time exception to the rules for the purpose of protecting the economic well-being of every American,” one Democratic senator said.

Yet going that route would require the support of all 50 Democrats — including Manchin and Kyrsten Sinema of Arizona, both of whom have been furiously opposed to weakening the 60-vote requirement and both of whom did not broach the topic at the closed-door lunch, the sources said.

Manchin told CNN on Monday to “forget the filibuster,” meaning that changing the rules was off the table for him. Yet after the lunch Tuesday, Manchin would not say if he would oppose a “carve out” in the filibuster rules to allow the debt ceiling to be raised. He told CNN the solution now lies in the hands of Senate Democratic leader Chuck Schumer and McConnell to cut a deal on the issue.

“The bottom line is they’ve got to work it out,” Manchin said. “The leadership has got to get together and work this out for the sake of this country.”

Democrats say they hope that Republicans will relent to avoid the prospects of an economic catastrophe.

“Right now we are two weeks away and I have confidence that Republicans — at least some of them — will see the light of day on this,” said Senate Budget Chairman Bernie Sanders, a Vermont independent who caucuses with Democrats.

White House officials have reached out to top US business leaders about a potential meeting with Biden, a source familiar tells CNN. If the meeting comes to fruition Wednesday, it would be seen as an effort to increase pressure on Republicans.

But Republicans have aligned themselves closely with McConnell, who has been warning since this summer that the GOP won’t lift a finger to raise the debt limit.

With fewer than 14 days until the deadline, Congress is flirting with a fiscal calamity. In 2011 when Congress was in a similar showdown over the debt limit, the country’s credit rating was downgraded. But Democrats have so far punted on questions about starting the special budget process, throwing questions to their leadership or largely arguing it’s too late.

“I don’t see any way that reconciliation can get done without a debt downgrade since we are in the zone already,” said Sen. Mark Warner, a Virginia Democrat.

Schumer added: “Reconciliation is a drawn-out, convoluted process. We’ve shown the best way to go. We are moving forward in that direction.”

The budget process would require the Senate to engage in a lengthy debate process, two marathon voting sessions known as a vote-a-rama, and ultimately would require Republicans to show up in committees to help Democrats advance the process.

One Senate expert told CNN that it could be finished in about a week if Republicans cooperated. And Senate GOP Whip John Thune said Tuesday that his party would be open to speeding up the process if Democrats went that route.

“They say it’s too unwieldy, takes too much time,” the South Dakota Republican said. “Well it can be addressed through agreement.”

But Democrats say that Republicans cannot be trusted to get an agreement on this issue, since any single senator can object to draw out the process. And already, Republicans have objected to Schumer’s efforts to allow the debt ceiling increase to be passed at a 51-vote threshold — just with Democratic votes — as the GOP has instead demanded they use the lengthy budget process to circumvent a filibuster and eat up precious floor time.

Democrats are slowly marching into a no-win situation. Under the budget process, Democrats would be required to specify the exact amount they would increase the country’s borrowing limit by even as the debt stands at nearly $29 trillion. The number would put Democrats facing reelection in a difficult political position. Under the current legislation they are trying to pass on Wednesday, Democrats would be “suspending” the debt limit until after the 2022 midterms without specifying a number.

But if Democrats don’t resolve the standoff, their party — which controls all levers of government — could face the bulk of the blame from voters hurt by the Washington stalemate.

“There are a lot of options, but Democrats have the majority and we have to act like it,” said Sen. Tim Kaine, a Democrat from Virginia. “If Republicans are going to flirt with default, we can point that out, but at the end of the day, we have to make sure the nation doesn’t default.”

This story has been updated with comments from President Joe Biden.