Livdose
Home News Automobile For every five new cars, eight used cars are sold: So, will...

New Delhi: Shan Khan a 28-year-old professional in West Asia recently came to India on annual leave. He has been looking to buy a new car, but due to uncertainties thrown by the pandemic, he played safe and bought a used car with his budget cut by 60%-70%.

Like Shan, there are several first-time buyers who moved to a used car as a precautionary step to save cash.

“Almost 50% of car buyers are first-time buyers. They start their journey as a car owner by buying a used car at an easily affordable price. I think it would be roughly 10% within a price bracket of INR 2 lakh to INR 3 lakh, 15% INR 3lakh to INR 4 lakh and 20% INR 4 lakh to INR 5 lakh and so on,” says Vikram Chopra, co-founder, and CEO of Cars24, a leading online used car buying, and selling platform.

In India, the used car business largely remains unorganised as only about 15% of the business goes to the institutional players like Maruti Suzuki-owned True Value, Mahindra First Choice, Hyundai Promise, Honda Auto Terrace, and other pre-owned car businesses of the OEMs.

According to True Value, demand for used cars surged during the pandemic with the preference for personal mobility getting stronger and stronger. At Maruti True Value, inquiries witnessed a growth of 6% in FY21. True Value which celebrates 20 years of incorporation has sold about four million cars since inception through 550 outlets across 274 cities.

“The purpose of a used car shifted from personal to family, where the major purchase was additional vehicles in the family (The additional buyer in the family contributed 36% ),” says Shashank Srivastava, executive director, Maruti Suzuki India and also head of the used car business.

Maruti Suzuki informed ETAuto that during the current pandemic, online searches for used cars have seen phenomenal growth as MSIL True Value website inquiry contributed to 67% of total inquiries in 2020-21.

According to global research and consulting firm ICRA, on the back of the increasing preference for personal mobility and the low base effect of the last fiscal, the used car volume is expected to grow over 15% in FY22.

“Demand for 4-wheeler would continue to build up due to the virus spread concerns and unlocking have just started with many states extending lockdown till mid of June but the flow of inquiries even in lockdown period makes us confident of better volume,” Srivastava said.

Within the used car segment, the organised players will grow at a much faster pace than the unorganised segment, underlines ICRA.

Replacement buyer inquiry contribution dropped to 17% in FY21 from 21% in FY20.Shashank Srivastava, MSIL

Another consulting firm Frost and Sullivan in its mid-term view of the pre-owned car volume says by FY25, the Indian market will be about 8.2 million to 8.5 million units annually from about 4.4 million units right now. This is more than twice 2.1 – 2.2x the new car market. (Is this sentence ok)

About the main motive of the customers Vikram Chopra said, there are buyers who can get the same car at a 30%-40% discount, and there are a few who don’t want to downgrade their budget but want to buy a better car. Nearly 50% of the consumers are buying a better car at the same budget. The remaining go for a used car to cut on the budget.

For MSIL, the share of the self-employed segment has grown while the salaried class has come down in the Covid period. This could be an impact of the new work from home culture. The contribution of family and business increased to 38% and 7% in FY2021 compared to 30% and 5% in the previous fiscal years respectively.

A similar trend was seen with the Mahindra First Choice too.

Showing a major impact on the economy, the share of the first-time buyers in the used car space declined to 57% in FY21 compared to 80% in FY20. The contribution of people looking to buy a used car as an additional family car increased to 36% in FY21 from 14% in the previous year.

According to True Value, NCR, Mumbai, Pune, Hyderabad, and Bengaluru are the top 5 pre-owned car selling cities. “The price range for a used car on our platform starts at INR 2 lakh and goes up to INR 6 lakh and also up to INR 15 lakh,” says Vikram Chopra. 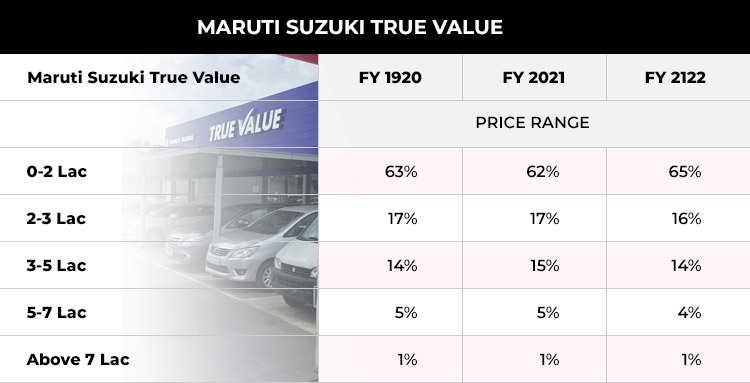 Almost 95% of used car buyers are looking for a car within the price range of up to INR 5 lakh in True Value as they sell only Maruti Suzuki brands. Of this 65% go for a price within INR 2 lakh, and only 1% buy used cars beyond INR 7 lakh.

However, for the multi-brand used car seller Mahindra First Choice, the price range of INR 5lakh to INR 7lakh contributed 22% of the total sales in FY21 compared to 17% in FY20.

About customer preferences, Vikram Chopra said, “When someone is looking to buy a pre-owned vehicle, I think there are two most important things in his/her mind. One – will I find the car that I’m looking for? And two, will I get the car of my specifications like the model not driven more than 30,000 km in this colour, or not older than that, and the like,”

Challenges on the way

Even as industry pundits predict strong growth for the used car demand in India, there remains some inherent challenge ranging from availability, compliance with customer preference and demand, and the increase in the registration cost of old cars.

According to the MoRTH draft notification, an individual will have to pay up to INR 5,000 for renewing the registration of an over 15-year-old car — almost eight times more than the current price.

Similarly, for more than 15-year-old imported vehicles, the proposed renewal fee is INR 40,000. Also, there is some green tax planned on used cars. Experts almost negated any impact of the registration fee hike on the demand.

“Hike in registration charges and renewal charges for used cars of over 15 years will impact the valuation of used vehicles, especially those older than 12-13 years. However, a large share of transactions happen for vehicles registered during the last 10 years and hence their resale price is unlikely to be materially impacted,” says Ashish Modani, vice president & sector head – Corporate Ratings, ICRA.

Kaushik Madhavan, vice president mobility – Frost & Sullivan South Asia, also said: “I don’t think the re-registration charges or scrappage policy will have any significant impact on the pre-owned cars market as the average holding period for the first life is reducing. Very few customers will hold on to their vehicles for 15 years.”

The shrinking new car sales can create a problem on the supply side. Like last year, people still contemplate holding on to their cars for a longer time, thus impacting the supply side replacement buyer inquiry contribution dropping to 17% in FY21 from 21% in FY20, Shashannk Srivastava said.

Vikram Chopra said that as consumers are looking at more and more sophisticated features and newer variants, they are upgrading their cars more often, which means that there is more supply of used cars. However, the situation may come under control if the new car sales rebound this year and pull out a consistent performance over the next two years.

“And then, demand has always been there. The issue has been supply. As the supply has started to increase, as consumers sell their car more often, demand has been there for years to meet the increase in the availability of cars,” he said, adding that the average life with the first owner for a new car is about four years. In bigger cities like Gurgaon, Delhi or Mumbai, there are consumers who sell their cars even after two or three years. The average for the country is around four years.

Tesla built its own Model 3-based police car in UK –...