The China challenge and the prospect of two live borders with collusive neighbours have led to India reaching out more enthusiastically for the Quadrilateral Security Dialogue with the US, Japan and Australia. The Quad’s collective heft, New Delhi hopes, will geopolitically address the military imbalance it faces on its vast mountainous frontier with China. It will also buy India time to accelerate its own military infrastructure along the border.

Washington also remains New Delhi’s most important security partner and one of its largest suppliers of military hardware. Interestingly, though, US President Joe Biden’s ratings among MOTN respondents dipped by 10 percentage points in the past eight months. In January, 52 per cent believed he was good for India; this month, only 42 per cent believe so. This may be because Prime Minister Narendra Modi and Biden have not met in person yet or made any significant announcements.

These developments are playing out even as border talks with Beijing yield slow and fruitful results. In May 2020, Indian and Chinese troops were eyeballing each other at five points along the Line of Actual Control (LAC), culminating in a deadly clash in the Galwan Valley on June 15, which led to loss of life on both sides. After a nine-month standoff, both sides pulled back from the north and south banks of Pangong Tso in February 2021. After the 12th round of comman­der-level talks on July 31 this year, both armies withdrew from the Gogra post area by August 5. They are now eyeballing each other only in one spot—the Hot Springs area of eastern Ladakh. China’s People’s Liberation Army preventing the Indian army from patrolling large parts of the Depsang Plains, bordering Aksai Chin, remains another unresolved issue.

Of the MOTN respondents, 78 per cent feel the government has handled the border intrusions with China either very well or satisfactorily. This is higher than the 59 per cent in January, who had said that India had given a befitting reply to China. 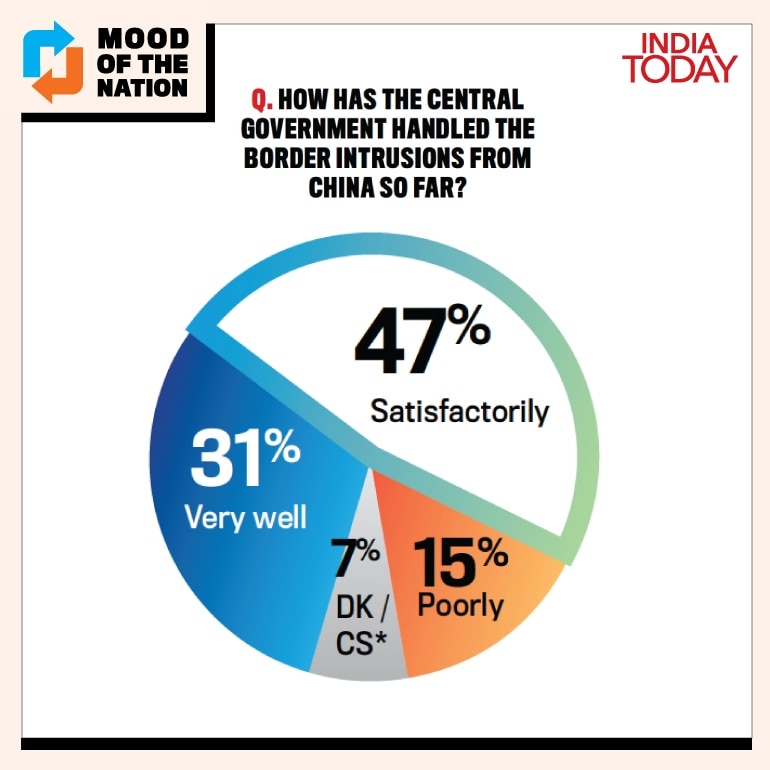 Military analysts see these withdrawals as being part of three ‘Ds’—‘Disengagement’ or stepping back from key conflict spots; ‘De-escalation’ or thinning down troops in the region; and ‘Demilitarisation’, which means pulling them out of the theatre altogether and restoring the ground position as it was in eastern Ladakh before May 2020. This last step will be the ultimate proof of this process, whether both sides will withdraw their troop, tanks and infantry. China’s May 2020 aggression has cast a cloud on New Delhi’s ties with Beijing. China insists it is business as usual. New Delhi says it is anything but.

The impact of these incidents on the overall boundary issue bet­ween the two countries is yet to be gauged. Special Representatives of both sides have addressed the issue of settling the 3,448-km-long boundary dispute since the 1990s. The two countries have yet to even agree on what constitutes the LAC. Despite its rapidly diminishing international clout and its focus on a post-US withdrawal Afghanistan, Islamabad retains the ability to stir trouble in Jammu & Kashmir using terrorist non-state actors. Leaders of India and Pakistan have not met for nearly six years since Modi met his Pakistani counterpart Nawaz Sharif in Islamabad in 2015. In 2019, a terrorist attack on a CRPF convoy in Pulwama, that killed 40 troopers, saw India despatching IAF jets to attack a terrorist training camp in mainland Pakistan. Seen from Islamabad’s perspective, India’s August 2019 abolition of J&K’s special status marks the lowest point in ties. India wants Pakistan to abandon the use of terrorism as an instrument of state policy before it can resume dialogue. Forty-five per cent of MOTN respondents favour a dialogue with Pakistan if Islamabad takes action against terrorism—a three percentage point dip from January. Public opinion on its foreign policy issues, clearly, is not one of the government’s worries.

Paris Hilton wore a dress made of toilet paper, and rocked it!

Katy Perry on Her Halloween Costume, New Campaign, and Etsy Finds for Her Daughter