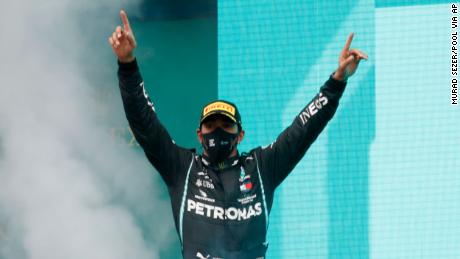 A brilliant drive during a rain-soaked Turkish Grand Prix ensured Hamilton not only won the race — for a record-extending 94th Grand Prix victory — but also equaled Michael Schumacher’s tally of seven world titles, the one remaining record of the German great that the Englishman has not yet surpassed.

In an Instagram post after his historic feat, Hamilton said the coronavirus pandemic had given him a chance to “really think about my ultimate purpose.”

“Seven World Championships means the world to me, I can’t even describe how much, but there’s still another race we’ve yet to win,” the post read.

“This year I’ve been driven not just by my desire to win on the track, but by a desire to help push our sport, and our world to become more diverse and inclusive. I promise you I am not going to stop fighting for change. We have a long way to go but I will continue to push for equality within our sport, and within the greater world we live in.

“Equaling Michael Schumacher’s record puts a spotlight on me that I know won’t be here forever. So, while you’re here, paying attention, I want to ask everyone to do their part in helping to create a more equal world. Let’s be more accepting and kinder to each other. Let’s make it so that opportunity is not something that is dependent on background or skin colour.”

No driver in the sport’s history has won as many races, secured as many pole positions or finished on the podium as many times as Hamilton. He is widely expected to add to his tally of world titles — saying on the podium after the race that he felt “like I’m only just getting started” — and his place in F1’s pantheon has long since been assured.

He is the face of F1, but also its voice and conscience and has used his stature like no other F1 world champion. F1’s first and only Black world champion in its 70-year history, this year he became one of sport’s leading voices in support of the Black Lives Matter movement.

With Hamilton being a force for change, Mercedes — famous for its silver livery — unveiled an all-black car for this season in solidarity with Black Lives Matter, with the drivers wearing black uniforms and the halos of both cars featuring the call to “End Racism.”

The Briton’s own incredible story — his father, Anthony, juggled three jobs, re-mortgaged the family home and dipped into his life savings to keep his son in karting — is an example of how notoriously difficult the sport is to enter, mainly because of the financial costs involved.

Speaking to reporters on Sunday, Hamilton said: “It is no secret that I have walked this sport alone as the only person of color here.

“The fact is I am bi-racial … and there is colorism that people should perhaps read about.

“When I was younger I didn’t have anybody in the sport that looked like me so it was easy to think that’s not possible to get there because nobody of your colour has ever been there, you don’t see any Black people in F1.

“But hopefully this sends a message to the kids that are watching … that it doesn’t matter where you come from, whatever your background, it is so important to you to dream big.

“You can create your own path and that is what I have been able to do, and it has been so tough. Tough doesn’t even describe how hard it has been.”

Immediately after the race, Hamilton sat in his car with his head buried in his hands and struggled to hold back the tears.

“Very rarely do I lose control of my emotions but I remember those last few laps and I was just telling myself to keep it together,” Hamilton told reporters.

“When I came across the line it really hit me and I just burst into tears.

“I didn’t want the visor to come up and people to see the tears because I always would say you will never see me cry. I remember watching other drivers cry in the past, and I was like, I am never going to do that, but it was too much.”

Hamilton needed to finish eight points ahead of his teammate Valtteri Bottas to secure the title at Istanbul Park. He did so with ease, lapping the Finn who crossed the line in 14th to collect zero points.

Driving in the same Mercedes machinery, Bottas’ performance illustrated just how superior a talent Hamilton is. No one has come close to challenging the world champion during this truncated season and he secured the title with three races still remaining, having won four races in a row and 10 of 14 races so far this year.