In Arizona, Noida girl Anika Varma gets a taste of golf in times of pandemic 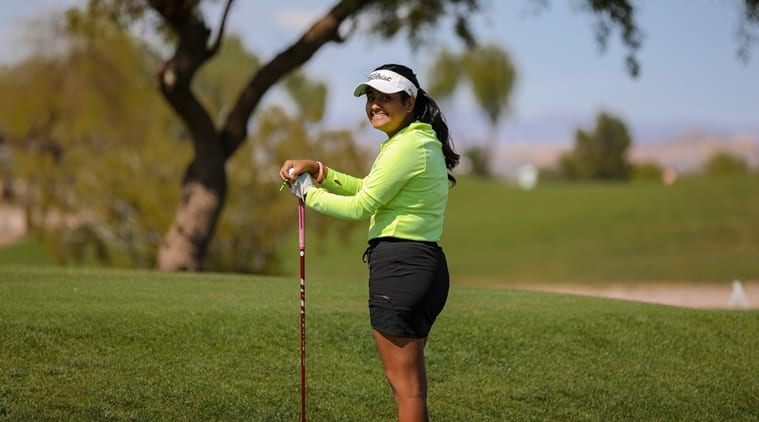 Golfers on the greens were asked to maintain a six-feet distance. They were not allowed to talk to each other, a strict no-contact policy was in place. Every player got an exclusive golf cart that was washed and bleached after each round every day. The tin cups at all holes were filled with foam so that the golfers didn’t have to dip their hand too deep to take out the ball after a putt. The washroom doors at the venue were never shut and every carton the course was stuffed with disinfectant wipes and sanitisers.

Noida girl Anika Varma, 15, got a feel of golf during the coronavirus pandemic when she participated in a Cactus Tour event — a series of tournaments for professionals and amateur players — at Phoenix, Arizona, in the United States. “Once I start playing the game, I am entirely focused on golf. The precautions of no-contact policy and sanitising were at first a bit abnormal but vital to prevent the spread of the virus and also to continue playing the sport,” says Anika.

Arizona takes its golf seriously. While all big golfing tournaments around the world, including the US Open, were cancelled or postponed, Arizona hasn’t yet shut its greens. Since the corona outbreak, the sport has been banned in 14 American states, a decision that closed 40 percent of the total 16,000 golf courses. However, last month, Arizona Governor Doug Ducey, while announcing restrictions listed the exceptions that included hiking, biking, and activities at the 300 golf courses in the state.

On Monday, the Arizona State Health Department put the number of COVID-19 positive cases there at 3,539 and the death count at 115. The corresponding overall numbers for the US have reached 5.5 lakh and 20,000 respectively. Despite this semi golf-lockdown in the US, Anika is busy. After finishing a credible fifth last week at Apache Creek Golf Course, she has now moved to Sun City in Arizona where she will take part in a tour event at Union Hills Golf Course.

For the young Indian golfer, the journey from Noida to Arizona has been long. It was to facilitate the education of Anika’s elder sister Akaansha that the Varmas moved to California last year in June. Once in the US, Anika enrolled at Granite Bay High School at Roseville, California and started working with coach Noah Montgomery, who trains nine-time Asian Tour winner Gaganjeet Bhullar. Last year, Anika got the best amateur trophy with a fifth-place finish in the Indian Open at Gurgaon. It was on Montgomery’s advice that the parents took a 13-hour road trip to Arizona. 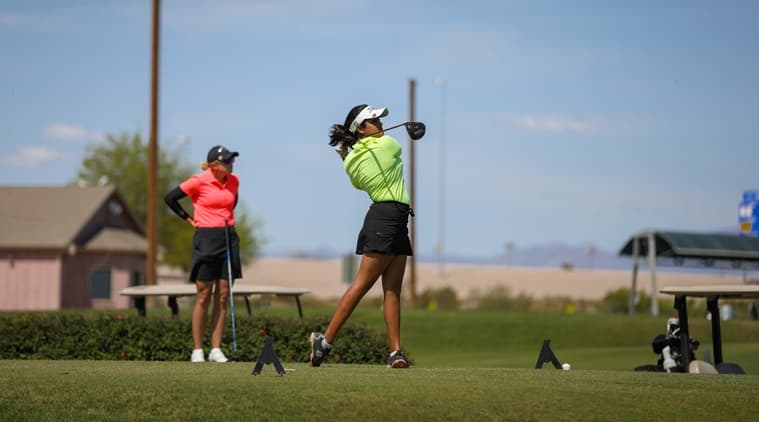 Anika Varma participated in a Cactus Tour event at Phoenix, Arizona, in the United States. (Source: Paige Lee)
Mother Sonal speaks about the importance of golf to the family and how the virus outbreak had made things difficult for them. “I have been in USA with my two daughters since last June. The situation in California was under control when we left. We made sure that we had disinfectant wipes and sanitisers with us. As an amateur, Anika does not get too much of professional golf, so this outing was important. We had a family discussion and after that booked an Airbnb in Arizona. We undertook a 13-hour car trip after consultations and followed all safety measures,” she says.

Montgomery, a former police officer, is also accompanying Anika. His 16-year-old daughter Hanna is also a participant in the tournament. He too underplays the risk of playing golf during a pandemic.“The Cactus Tour is a developmental tour, so we don’t have any spectators walking, which contributes towards social distancing. Every state and county (districts) follow their own set of rules and guidelines. At present, I can only speak about Arizona, where golf courses are open to play with the safety measures in place. Playing against some LPGA golfers has added to Anika’s confidence. As a coach, I aim to provide my students with a well-rounded training and that’s what this tour provides us,” says Montgomery.

Anika says it was because of her parents that she could think of travelling to this tournament. “My parents were supportive of my decision to play golf in Arizona. Adjustments like the use of foam and other things are essential precautions to maintain health safety for the players. The tour committee has also made sure that the carts are washed with bleach and water every day. My coach helped me adjust to this new way of training during this outbreak. He helped me realise that everyone is fighting the outbreak in their own way,” the teenager shares.

With the coronagraph refusing to flatten in the US, the number of golfers participating in every event on the Cactus Tour has gone down from 40’s to less than 20. Mother Sonal is keeping a close watch on the state guidelines and latest COVID-19 developments. “When we decided to travel to Arizona, our relatives in India were worried. But they understood our decision. We are as safe here as in any other place. I would say we are safer than my elder daughter, who attends university, works at her labs and goes for groceries in California. If something was not right, as a parent, I would not let Anika play,” says Sonal. Anika Varma with her father Sonel Varma. (Source: Paige Lee)
While Sonal ensures that Anika attends all her online classes while travelling for golf, father Sonel drives Anika’s cart on the course. “With no crowd at the courses, her father is taking care of driving her cart and I follow in another one. I can see them discussing golf. We will take it week by week and decide whether or not to continue,” says the mother.

Is there anything that Anika misses during these restrictive times?

“Anika is a talkative player on the course and that’s what she is missing these days,” adds Sonal.