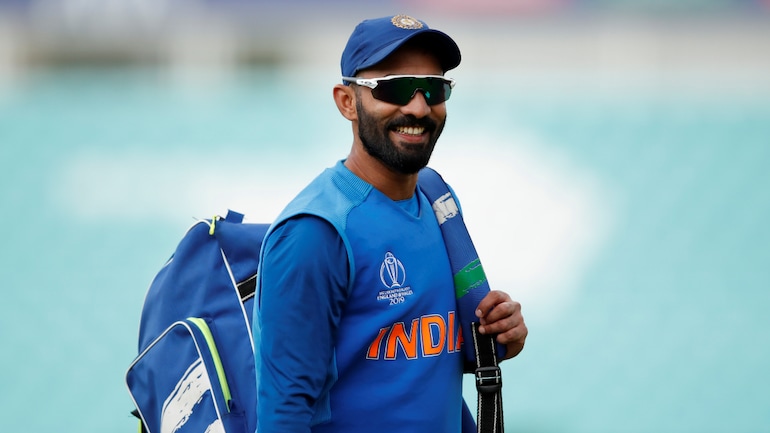 With wicketkeeper duo of Rishabh Pant and Wriddhiman Saha in self-isolation, Dinesh Karthik, who is in England too as a part of the broadcast team, has hinted that he can don the gloves too if given a chance.

Dinesh Karthik, who is in England too as a part of the broadcast team, has hinted that he can keep the wickets too if given a chance
(Courtesy: Reuters)

The dreaded coronavirus has hit the Indian cricket team ahead of next month’s Test series against England, starting August 4 in Nottingham.

Wicketkeeper-batsman Rishabh Pant and throwdown specialist Dayanand Garani has tested positive for Covid-19. At the same time, three others, including bowling coach Bharat Arun, Wriddhiman Saha, and Abhimanyu Easwaran are in self-isolation.

Team India will begin their preparations for the upcoming five-match Test series against England with a three-day warm-up game at Emirates Riverside against County XI starting on Tuesday.

With Pant and Saha in isolation, the only option left with Team India would be to field KL Rahul as the keeper.

However, Dinesh Karthik, who is in England too as a part of the broadcast team, has hinted that he can keep the wickets, too if given a chance. Karthik took to Twitter and subtly send a gentle reminder to the BCCI team management that he is ready for the role.

The rest of the squad, sans Pant and the injured Shubman Gill, left for Durham from London.

Gill had sustained a leg injury earlier this month and the young batsman had left the team’s bio-bubble.

The development comes close on the heels of BCCI secretary Jay Shah sending an e-mail to the Indian contingent, warning it about the rising cases of Covid-19 in the United Kingdom.

Shah, in his letter, told the players to “avoid” crowded places as Covishield, the vaccine which has been given to the team only provides protection, not full immunity against the virus.

In fact, Shah’s letter had specifically stated that players should avoid going to the Wimbledon and Euro Championships, both of which recently concluded there.The England team was recently hit by the virus and was forced to field an altogether different XI in a limited-overs match against Pakistan.