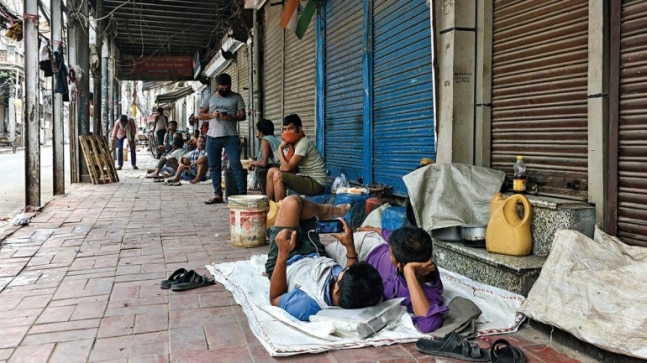 There are many reasons for this fall in confidence. In 2020-2021, India’s GDP growth turned negative for the first time in four decades, contracting 7.3 per cent over the entire fiscal. According to RBI (Reserve Bank of India) data, household savings fell to 8.2 per cent of GDP in the quarter ending December 2020, from 10.4 per cent in the preceding quarter. Reflecting this, a mere 28 per cent of the MOTN survey respondents reported an improvement in their economic status in August 2021, down from 49 per cent in January 2021. About 24 per cent reported a deterioration in their economic status, double the figure in January 2021. (However, this figure is still lower than the percentage of respondents who reported a deterioration in their economic status in 2016 and 2018.) Overall, the optimism around the Indian economy has dimmed substantially. In January 2021, when the first wave was just beginning to ebb, the optimism was much higher, with 41 per cent of surveyed respondents believing the economy would improve in the next six months.

In the latest survey, only 21 per cent of respondents were optimistic about the economy improving in the next six months. While the second wave of Covid is subsiding, its economic impact in May and June this year was deleterious. In June 2021, the Manufacturing PMI (purchasing managers’ index, a measure of industrial activity) dipped to an 11-month low of 48.1 from 50.8 in May 2021, while Services PMI contracted for the second successive month to its lowest level since July 2020, falling to 41.2 in June from 46.4 in May. Passenger vehicle sales also continued to slide, and are at half the level seen in March 2021. GST (Goods & Services Tax) collections have dipped to less than Rs 1 lakh crore in June after reaching a high of Rs 1.41 lakh crore in April 2021.

A Pew Research Center study estimates that India’s middle class shrank by 32 million in 2020 as a consequence of the Covid-19 induced downturn, while the number of those who are poor—with a daily income of $2 (Rs 148) or less—is estimated to have increased by 75 million. India’s numbers account for nearly 60 per cent of the global increase in poverty.

The economic disruptions of the pandemic have led to massive unemployment, with infrastructure development and construction drying up due to state-imposed lockdowns, many MSMEs (micro, small and medium enterprises) shutting shop and firms across the board laying off workers and slashing salaries. According to data from CMIE (the Centre for Monitoring Indian Economy), at least 3.2 million salaried jobs were lost in July despite improved economic activity. While some jobs have been returning to the unorganised sector with the lifting of lockdowns, the organised sector continues to keep staff numbers on a tight leash. Not surprising then that 59 per cent of those polled in the MOTN survey said India’s unemployment situation was “very serious” while another 24 per cent rated it as “somewhat serious”. Only 17 per cent said they believed their household incomes or salaries will improve in the near future, with 45 per cent saying they will remain the same and 34 per cent believing they will fall further.

Adding to Indians’ woes is high inflation. High fuel costs and rising prices of manufactured goods took India’s wholesale price index (WPI) inflation to a record high of 12.9 per cent on a year-on-year basis in May. (The WPI tracks changes in the price of goods in the stages before they are retailed.) A low base effect in the previous fiscal also contributed to the rise. Meanwhile, retail inflation, measured by CPI (the consumer price index), rose to 6.3 per cent in May on the back of spiking food and energy prices, breaching the RBI’s targeted inflation ceiling of 6 per cent. About 60 per cent of those surveyed feel that the central government is not doing enough to control inflation. Including both central and state duties, taxes comprise 55 per cent of the retail price of petrol and nearly 50 per cent of diesel; however, governments have shown no inclination to cut taxes, leaving consumers to suffer. 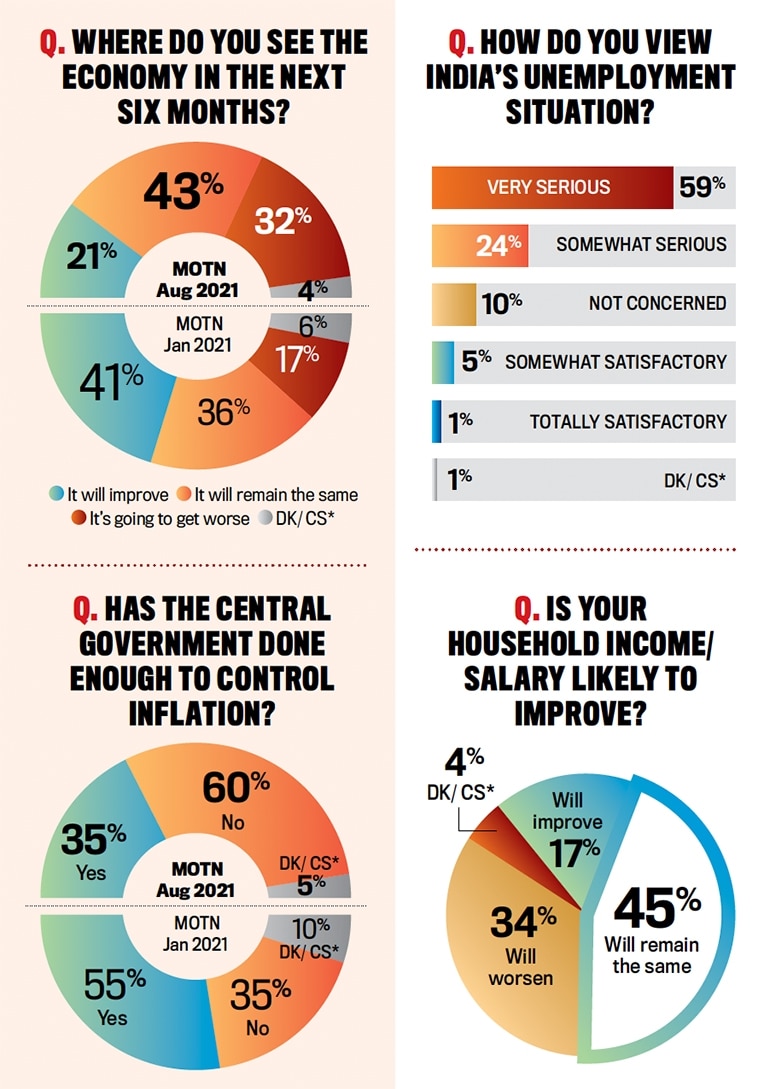 The perception that government policies are largely aimed at helping big corporates has only grown during the Modi government’s second term. As many as 46 per cent of those polled said the Centre’s policies have only benefitted big business, up from 39 per cent in January. Media reports in May said India Inc saw a 20 per cent year-on-year increase in revenues in the fourth quarter of 2020-21 compared to a year ago, while profits rose 62 per cent as a result of demand recovery and cost-saving measures. The good corporate performance and booming stock markets—with everyday Indians reeling from job losses, income cuts and soaring prices—have added to the perception that big businesses are the primary beneficiaries of government policies. While this augurs well for the economy at large, it has not translated into investments on ground by corporates.

When it comes to the Centre’s Aatmanirbhar Bharat Abhiyaan, 38 per cent of respondents said it was a worthwhile effort, though this number is down from 46 per cent in the previous survey. However, 19 per cent said it was just a political promise with no substance, with 17 per cent saying it is not a practical initiative.

Ground reports make it increasingly clear that the public is becoming visibly restive on the economic front, as the pandemic continues to impact livelihoods. While the central as well as state governments have taken several measures, the survey highlights that gaping holes remain in economic relief. The ruling dispensation must take note.