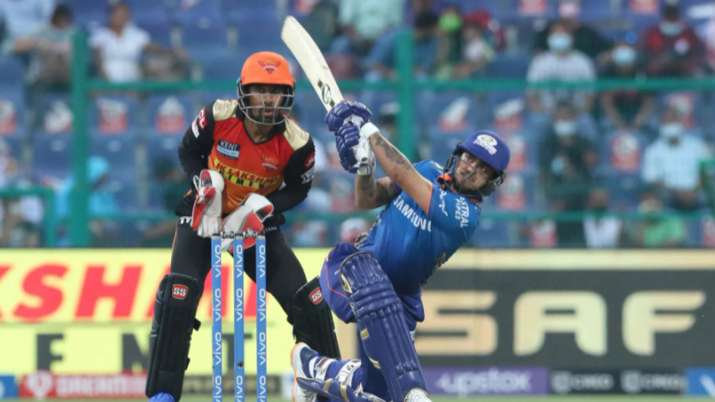 Mumbai Indians defeated Sunrisers Hyderabad by 42 runs in their final league game of the 2021 Indian Premier League. However, the side failed to qualify for the playoffs as MI needed a minimum run-difference of 170 to reach the playoff stage.

The MI scored a mammoth total of 235/9 in 20 overs while batting first, while the Sunrisers — despite a strong start which saw them reaching 71 in the powerplay, could score 193/8.

Ishan Kishan was brilliant for the MI in the game, as he scored 84 off just 32 deliveries to set the tone for the side’s victory.

The youngster recieved the man of the match award in the post-match presentation. He said that it was good to return to form ahead of the 2021 T20 World Cup.

“A very good thing for me and for the team getting some runs, and getting into good touch before the World Cup. Was in good state mind of mind, was very positive,” said the young wicketkeeper-batsman.

On his approach in the game, Kishan said that it was a “do-or-die situation” and that the team had to adopt an attacking mindset from the start.

“I knew we are in a do-or-die situation. It was just the intent and the positive mindset,” said Kishan.

“I haven’t scored as many boundaries in the cover region this season. You have to be prepared for every circumstance. It’s important to be in that mindset.”

The youngster also said that Indian captain Virat Kohli motivated him to open.

“I had a chat with Virat bhai, HP [Hardik Pandya], KP [Pollard] – they were all there. I would love to open, and that is what Virat bhai said: ‘You are selected as an opener, you just have to be prepared for that.’ In the bigger stage, you need to be prepared for every situation,” said the youngster.