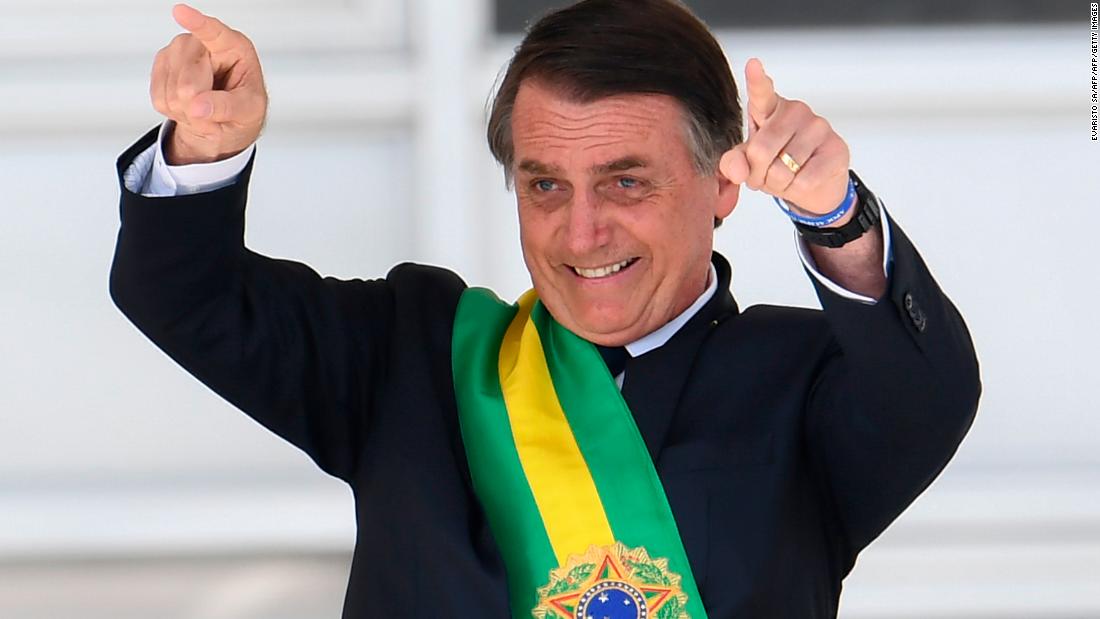 A conservative provocateur, Bolsonaro has a predilection for making inflammatory statements. His rhetorical targets include women and the LGBTQ community. In 2003, he told a congresswoman that she was not worthy of being raped. During a 2011 interview with Playboy magazine, Bolsonaro said he would be incapable of loving a gay son. He has expressed a sense of nostalgia for Brazil’s past as a military dictatorship.
Bolsonaro served seven terms as a congressman in the Chamber of Deputies. While in congress, his priorities included protecting the rights of citizens to own firearms, promoting Christian values and getting tough on crime. In 2017, he said, “A policeman who doesn’t kill isn’t a policeman.”

Bolsonaro changed his party affiliation numerous times, ultimately campaigning for president as a member of the Social Liberal Party.

When Bolsonaro took office, Brazil was suffering through a prolonged period of economic malaise and rising insecurity. His ascent was preceded by a corruption scandal that rocked political and financial institutions. During his inaugural address, Bolsonaro vowed to transform Brazil into a “strong and booming country.”

1986 – Bolsonaro writes an opinion column for the magazine Veja that criticizes the Brazilian Army’s pay system. He is subsequently disciplined for insubordination.

1991-2018 – Congressman representing Rio de Janeiro in the Chamber of Deputies.

July 22, 2018 – Bolsonaro announces he is running for president.

August 15, 2018 – Luiz Inacio Lula da Silva, a former president of Brazil, announces he has submitted the necessary paperwork to register as the Workers’ Party candidate to run against Bolsonaro. Lula da Silva campaigns from prison, where he is serving a 12-year sentence for corruption.
September 1, 2018 – Brazil’s top electoral court bars Lula da Silva from running for re-election while incarcerated. Ultimately, a former mayor of São Paulo named Fernando Haddad steps in as the Workers’ Party candidate.
September 6, 2018 – Bolsonaro is stabbed in the stomach during a campaign rally. He spends more than three weeks in the hospital recovering.

October 7, 2018 – Voters cast ballots in the first round of elections. Although Bolsonaro wins more votes than Haddad, he doesn’t surpass the 50% threshold. A runoff is set for later in the month.

October 28, 2018 – Bolsonaro wins the runoff. The final tally shows Bolsonaro with 55.13% and Haddad with 44.87%.
January 1, 2019 – Bolsonaro is sworn into office. On the same day, he issues a series of executive orders. One order could potentially strip away many LGBT civil rights protections by eliminating LGBT issues from the list of matters handled by the Ministry of Women, Family and Human Rights. Another order gives the Agriculture Ministry the authority to designate indigenous lands, paving the way for agricultural development in areas that were previously off limits.

January 15, 2019 – Signs an executive order temporarily eliminating a regulation that limits firearms purchases only to individuals who provide a justification for owning a gun. The regulation gave police discretion to approve or deny gun sales.

January 28, 2019 – Officials say Bolsonaro has undergone successful surgery to remove a colostomy bag he was fitted with after being stabbed four months ago.
February 28, 2019 – Bolsonaro meets with Venezuelan opposition leader and self-proclaimed interim president, Juan Guaidó in Brasilia. During a joint news conference, Bolsonaro pledges Brazil’s support to help ensure “democracy is re-established in Venezuela.”
May 3, 2019 – A spokesman for Bolsonaro announces that the president has canceled a trip to New York, where he was set to be honored with a Person of the Year award from the Brazilian-American Chamber of Commerce. The trip was scrapped amid a political backlash. The event’s original host venue, the American Museum of Natural History canceled and some corporate sponsors dropped out. New York mayor Bill de Blasio had called Bolsonaro “a dangerous man.”
May 7, 2019 – Bolsonaro signs an executive order relaxing gun control restrictions. The executive order makes it easier for guns to be imported and boosts the amount of ammunition an individual can purchase annually.
July 11, 2019 – During a news conference, Bolsonaro says that he wants his son, Eduardo Bolsonaro, to serve as ambassador to the United States. He says that Eduardo is friendly with the children of US President Donald Trump.
August 23, 2019 – Bolsonaro announces a plan to send army troops to fight wildfires sweeping through the Amazon rainforest.
August 26, 2019 – At the G7 summit in France, French President Emmanuel Macron announces a $20 million emergency fund to help Brazil with the fires. Bolsonaro responds that he cannot accept Macron’s “intentions behind the idea of an ‘alliance’ of the G7 countries to ‘save’ the Amazon, as if we were a colony or no man’s land.” The dispute devolves after a Facebook user posts a meme ridiculing the appearance of Macron’s wife on Bolsonaro’s page and the president jokes, “Don’t humiliate the guy…haha.”

September 8, 2019 – Bolsonaro undergoes a hernia operation to treat complications from prior surgeries conducted as he recovered from a stab wound.

December 24, 2019 – Tells the Band TV network that he was hospitalized overnight after falling in the presidential palace December 23. He says he had brief memory loss, but that he has recovered.

April 19, 2020 – Bolsonaro joins a rally in the country’s capital, where protesters called for an end to coronavirus quarantine measures and some urged military intervention to shut down Congress and the Supreme Court. He later defends his participation, saying that he was not calling for military action against the country’s other branches of government.
June 23, 2020 – Bolsonaro is ordered by a federal judge in Brasilia to wear a face mask in public or face a fine. The decision extends to all government employees in the Federal District, where the capital Brasilia is located.
July 7, 2020 – Bolsonaro announces he has tested positive for Covid-19, following months of downplaying the virus.
March 16, 2021 – A Brazilian court orders Jair Bolsonaro to pay damages to a journalist after he made remarks that questioned her credibility.
April 27, 2021 – Brazil’s Senate launches an inquiry Tuesday into the federal government’s response to Covid-19.
July 14, 2021 – Bolsonaro is admitted to the hospital to investigate the cause of persistent hiccups that are leading to abdominal pains, according to Brazil’s Special Secretariat for Social Communication.

Pak PM says US has really messed it up in Afghanistan