Livdose
HomeNewsPoliticsKeeping possibility of alliance in mind, Cong ready with ‘plan B’
NewsPolitics

Keeping possibility of alliance in mind, Cong ready with ‘plan B’ 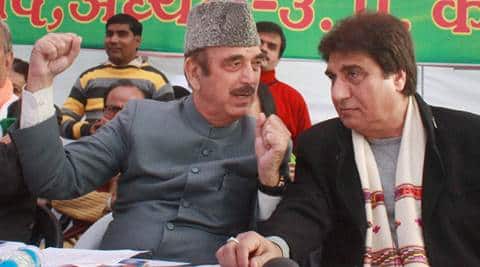 While the Congress’ poll committee has drawn up a list of probable candidates on all 403 assembly constituencies in the state, a possible alliance with the Samajwadi Party (SP) has members scurrying to prepare a “plan B”. While SP patriarch Mulayam Singh Yadav had earlier ruled out any alliance in the upcoming polls, Chief Minister Akhilesh Yadav had openly supported an alliance with the Congress. He had claimed that, together, the parties could win over 300 seats in the Assembly. Although Congress is keeping quiet over the issue, sources say the party may pitch for at least 100 seats if it enters into an alliance with the SP. Sources within both parties inform that although there is no set formula, leaders and workers have already made their mind and have also got indications from the party leadership.

In 2012, 28 seats went to the Congress. Later, it won a by-election and increased its tally to 29. However, in the months running up to the election, the party has seen nine of its legislators defect to various parties. These include three Muslim MLAs, who joined BSP; Mukesh Srivastava, who joined SP and remaining joining BJP including former state president Rita Bahuguna Joshi. Sources inform that among the seats for which the Congress would put stake claim would include about 23 out of 28 seats, which it had won in the 2012 assembly election.

While the party has assured 20 of its sitting MLAs, a seat, the Congress is likely to make a claim for other seats like Tiloi in Amethi, from where its MLA Mohd Muslim defected to join the BSP.Out of 10 seats in Rae Bareli and Amethi, Congress might also claim Gauriganj and Amethi.

Sources say Amethi is likely to be a point of contention if Akhilesh decides to give the ticket to his minister Gayatri Prajapati. This would leave wife of Congress Rajya Sabha MP Sanjay Sinha in a spot – this was her constituency until she was defeated by Prajapati in the last election.

Rae Bareli district, a Congress bastion, will most likely remain with the party. Sources confirmed to The Indian Express that Congress national president Sonia Gandhi’s daughter Priyanka had given the go-ahead for all contestants of the previous election to contest the seats here.

Rubi Prasad, an Independent who won the Dudhi seat (Sonebhadra district) with the support of the Congress, has been assured of Akhilesh’s support this time. Apart from these, Congress may claim 30 others, 20 of which party insiders say it has a strong chance, where it had lost but came in second in the last elections. But even here, there are those who left the party. One such example is Anil Kumar Verma, who had contested 2012 election as Congress candidate from Laharpur assembly constituency and had lost the election to BSP candidate. Verma has now joined Samajwadi Party and has already figured in the list released by Akhilesh Yadav.

Among these, the Deoband seat, may be another point of bother: Both Congress and SP feels it is their region. Apart from these, there are about 10 seats on which senior party leaders and former party MPs are taking responsibility for the election of their close relatives.

Although party leadership claims that “Jitau and Tikau” (winnability and loyalty) are their two top criteria while selecting candidates, sources inform that there are large number of outsiders, who have recently joined the party and party feels that they stand a better chance under Congress banner. Sources inform that some of the recent public meetings of AICC General Secretary Ghulam Nabi Azad against demonetisation and “Jan Akrosh rally” was strategically planned in districts where party feels that it stands a better chance.