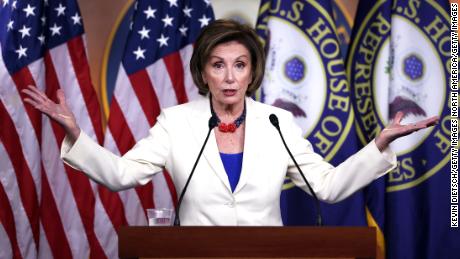 Pelosi’s decision to reject the two Republicans — and McCarthy’s response to pull the rest his members — injected new fuel into the partisan fight over the select committee that’s been raging since Democrats created the panel last month to investigate the circumstances surrounding the January 6 attack on the Capitol.

The committee will still have Republican representation from one member: Rep. Liz Cheney of Wyoming, an outspoken critic of former President Donald Trump who was one of Pelosi’s eight choices to serve on the committee. Cheney’s participation keeps the committee bipartisan even without anyone appointed by McCarthy.

Still, Pelosi’s move to reject Reps. Jim Jordan of Ohio and Jim Banks of Indiana gives House Republicans an avenue to attack the select committee as a partisan endeavor. McCarthy slammed the move shortly after it was announced Wednesday.

“Unless Speaker Pelosi reverses course and seats all five Republican nominees, Republicans will not be party to their sham process and will instead pursue our own investigation of the facts,” McCarthy said.

At a news conference Wednesday, McCarthy accused Pelosi of an “egregious abuse of power.”

“Pelosi has broken this institution,” he said.

One senior GOP source argued that Pelosi’s move was a “gift” to Republicans because they never wanted to take part and, if they were on the committee, would be forced to confront complicated questions over Trump’s role in January 6.

But the lack of Republicans appointed by McCarthy on the panel means there will no longer be allies of Trump when the committee holds high-profile hearings on the January 6 attack. Next week’s hearing with four officers on the frontlines of January 6 is not being delayed, spokesman Drew Hammill told CNN.

Cheney issued a statement Wednesday on the steps of the Capitol defending Pelosi and criticizing McCarthy for earlier objecting to the creation of a bipartisan independent commission to investigate the insurrection. She suggested that Jordan could be a “material” witness to the investigation.

“I agree with what the speaker has done,” Cheney said.

She added: “At every opportunity, the minority leader has attempted to prevent the American people from understanding what happened, to block this investigation. … I am absolutely dedicated and committed to making sure this investigation holds those accountable who did this and ensures that it never happens again.”

Pelosi said in a statement Wednesday she was vetoing the appointments of Jordan and Banks. Both are allies of Trump and had objected to the certification of the November 2020 election in the House on January 6. McCarthy had selected Banks, the chairman of the Republican Study Committee, to be the top Republican on the panel.

“With respect for the integrity of the investigation, with an insistence on the truth and with concern about statements made and actions taken by these Members, I must reject the recommendations of Representatives Banks and Jordan to the Select Committee,” Pelosi said. “The unprecedented nature of January 6th demands this unprecedented decision.”

Pelosi said she approved of the appointments of Reps. Rodney Davis of Illinois, Kelly Armstrong of North Dakota and Troy Nehls of Texas. Banks, Jordan and Nehls all objected to the certification of the 2020 presidential election.

Jordan has been a loyal ally of Trump and an attack dog in Congress, who was added to the House Intelligence Committee in 2019 ahead of the committee’s public impeachment hearings.

“Speaker Pelosi just admitted the obvious, that the January 6th Select Committee is nothing more than a partisan political charade,” Jordan said in a statement Wednesday.

Since his appointment, Jordan had been voicing his concerns that the committee was going to be too focused on Trump and even telegraphed targeting Pelosi as the investigation wore on.

“There’s one fundamental question that I hope Democrats will actually answer and address and that is why wasn’t there a proper security presence that day? And frankly, only the speaker can answer that question, so let’s see if the Democrats bring that up,” Jordan said Tuesday.

Democrats on the select committee defended Pelosi’s decision, saying McCarthy could still appoint members who would take the investigation seriously. Rep. Jamie Raskin, a select committee member, pulled up to reporters the statement that Banks released Monday after McCarthy named him to the panel, which said that the committee was created “solely to malign conservatives and justify the left’s authoritarian agenda.”

“The speaker is making clear we’re going to have a serious comprehensive investigation. This will not be just another run-of-the-mill, partisan food fight,” Raskin said.

House Intelligence Chairman Adam Schiff, a California Democrat and another select committee member, said Banks and Jordan “were clearly selected just to be disruptive, and that’s not acceptable.”

Shortly after announcing she would reject Jordan and Banks, Pelosi rejected any concerns about House Republicans pulling out select committee.

“We have a bipartisan quorum. We can proceed,” Pelosi said.

Pelosi did not explain why she accepted Nehls but not Jordan and Banks — all of whom voted to overturn electoral results. “That was not the criterion, as I told you yesterday,” Pelosi told CNN.

Earlier this week, Pelosi told CNN that whether an individual voted to certify the election would not determine if she approved them for the committee.

“Let me be clear, how people voted on affirming the election of Joe Biden is not a criterion for service. That doesn’t matter,” Pelosi said. But she wouldn’t elaborate on what she is weighing in her decision-making.

In announcing her rejection of Banks and Jordan, Pelosi mentioned there were “objections” with their selections but did not specify what those objections were.

Based on how the committee was created, Pelosi is able to appoint eight members to the commission and McCarthy has five slots “in consultation” with Pelosi — meaning the speaker had the option to veto his selections.

Pelosi moved forward with the select committee last month after her effort to create an bipartisan commission to investigate the January 6 attack was blocked by Senate Republicans. In the House, 35 Republicans voted in favor of the independent commission, but only two, Cheney and Rep. Adam Kinzinger of Illinois, voted in favor of the select committee.

This story and headline have been updated with additional developments Wednesday.