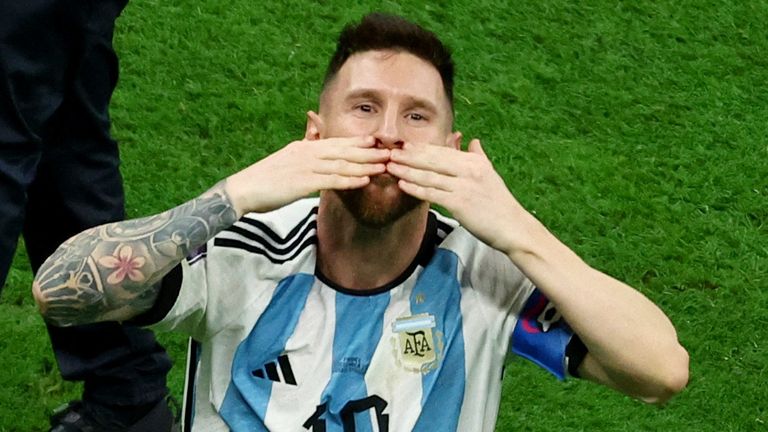 Michael Gove invoked Lionel Messi in a speech about levelling up in which he compared the UK economy to a football team with a “star striker and defence full of holes”.

Speaking at the Convention of the North on Wednesday, the cabinet minister likened the way the UK’s political economy had been run in the past, reliant on London and the South East, to a failing football team which had let the country down.

He said: “We all know we can’t prosper so much as a state if we rely so much on one region, and within that region, on one city.

“The UK economy has been like a football team with a star striker, but a midfield that consistently struggles to get the ball upfield and a defence full of holes.

“And no forward, not even Lionel Messi, can do it on his own.”

Mr Gove also cited Margaret Thatcher’s administration in the 1980s – a decade marked by the closure of coal mines and industrial strife in the North – as a model for elements of levelling up.

He said the former Tory prime minister’s transformation of the London docklands was his inspiration for the plan to narrow economic and social disparities between the North and South.

“When the Thatcher government took office in 1979, London’s docklands were a derelict economic desert,” the levelling up secretary told business and political leaders gathered in Manchester.

“The original vision for re-generation of the area, from the Treasury of the time, was simple: just cut taxes and de-regulate and a thousand flowers will bloom in the dusty and contaminated soil of the docklands.”

But he said Mrs Thatcher helped set up deeper government intervention through the London Docklands Development Corporation, bringing jobs and housing and transforming that area of the capital.

He said: “Government created the environment, the private sector created the jobs. London Docklands today is an economic success story.

“It is that spirit that animates our levelling up policies: active government.”

Read more:
Revealed: How the North/South divide affects the UK economy
Will PM’s levelling up funding generate enough of a political return?

The speech comes after criticism that new funding announced last week for community projects favoured affluent areas over deprived ones.

Separately, an analysis by a northern think tank found the region receives one of the lowest levels of investment among advanced economies.

Mr Gove admitted the UK has an “enduring and entrenched geographical and social divide” and said it is “insufficiently resilient, inherently constrained by supply-side weaknesses and unequal in access to power, capital and investment”.

Levelling up ‘should be enshrined in law’

Northern leaders have called for more devolution and funding, saying the concept of levelling up should be “hard wired” into UK law to help close the gap in living standards.

Andy Burnham, the Labour Mayor of Greater Manchester, pointed to Germany where he said “there is a law that says there must be equal living standards between the 16 regions”.

“And when you go there you can see it and feel it in the quality of public transport in the different cities, the public realm,” he told Sky News earlier on Wednesday.

UK ‘must change or die’


Labour’s Lisa Nandy on levelling up in the North

Levelling up was a key policy under former PM Boris Johnson, who said the “defining mission” of his government was to break the link between geography and destiny “so that no matter where you live you have access to the same opportunities”.

But Labour have accused the Conservatives of failing to deliver on that pledge, with shadow housing secretary Lisa Nandy saying the UK must “change or die”.

“For 15 years, since the global crash, the failure of running an economy like this has been plain to see,” she will say.

“But every time the public has sounded the alarm, hitting our politicians with tsunami after tsunami of discontent, our creaking political system has done nothing.

“This is the collective task facing our generation of political leaders: to respond to that siren call or face obsolescence. To change or die.”