Mickey Wright, who won 82 LPGA tournaments, 13 of them majors, and was perhaps the finest player in the history of women’s golf, died Monday in Florida. She was 85.

The cause was a heart attack, her lawyer, Sonia Pawluc, told The Associated Press. Wright had been hospitalized for the past few weeks after being injured in a fall.

A long hitter known for her compact and fluid swing, Wright dominated the LPGA Tour in the late 1950s and much of the 1960s. She was eclipsed in career victories only by Kathy Whitworth’s 88 and in major-tournament victories only by Patty Berg’s 15.

Wright won both the U.S. Women’s Open and the LPGA Championship four times, and she captured the Western Open three times and the Titleholders Championship twice when they were major events.

She was named the Woman Athlete of the Year by The Associated Press in 1963, when she won 13 LPGA tournaments, still a record for a single season, and in 1964, when she won 11 times. 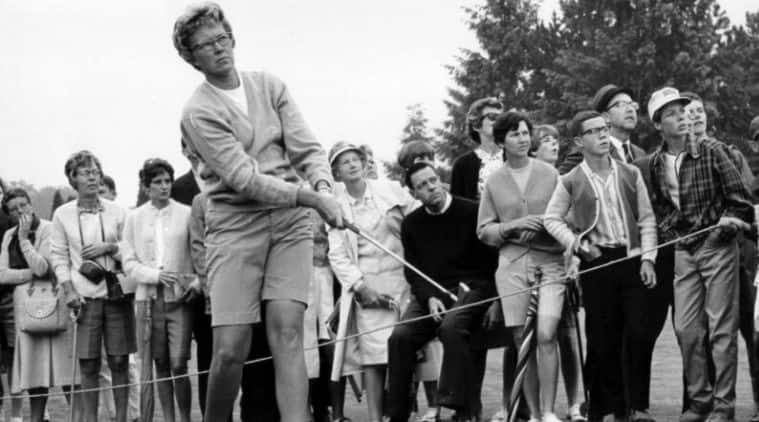 In this 1967 file photo, the gallery follows Mickey Wright’s iron shot from the fairway at the Toronto Golf Club. Hall of Fame golfer Wright, who won 82 LPGA tournaments including 13 majors, died Monday, Feb. 17, 2020, of a heart attack, her attorney said. Wright was 85. (AP Photo, File)
Wright’s three women’s major victories in a single year (she won the U.S. Women’s Open, the LPGA Championship and the Titleholders in 1961) have been equaled only by Babe Zaharias (1950), Pat Bradley (1986) and Inbee Park (2013).

In December 1999, a six-member panel assembled by the AP voted Wright the top women’s golfer of the 20th century, ahead of Zaharias and Whitworth.

Ben Hogan was often quoted as saying that Wright “had the finest golf swing I ever saw.”

“She was the best I’ve ever seen, man or woman,” Whitworth said in an interview for ESPN in 2015. “I’ve had the privilege of playing with Sam Snead and Jack Nicklaus and Arnold Palmer and all of them. And some of our ladies had wonderful golf swings. But nobody hit it like Mickey, just nobody.”

Wright spoke of a competitive fire that complemented that form.

“The great winners in golf — Hogan, Nicklaus, Jones, you might have to think about Tiger Woods — they were all great swingers, but their inner drive was off the charts, too,” she told Sports Illustrated in 2000. Asked if she would include herself in that list, she replied, “Yes, I would.”

Wright captured five straight Vare trophies for lowest scoring average on the tour (1960 to 1964) and she twice shot LPGA-record rounds of 62. She was inducted into LPGA Hall of Fame in 1964 and the World Golf Hall of Fame in 1976.

“She sort of revolutionized golf for us because she was so good and her swing was so perfect,” Betsy Rawls, who won eight majors, told AP in 2006. “Even though we were competitors, she was a joy to watch.”

WI vs BAN T20 WC Preview: West Indies, Bangladesh take on each other in their quest for win