Mood Of The Nation poll: Economy the big worry This is the big message that emerges from the findings of the latest INDIA TODAY-Karvy Mood of the Nation (MOTN) survey, conducted at a time when India, like most other nations, finds itself at a critical crossroads. The biannual survey should serve as a stern warning to leaderships across the political spectrum to set aside their differences and work hard towards pulling the nation out of the morass it finds itself in. The MOTN findings provide invaluable insight into how people perceive the key issues the country faces, and what they expect will be done to overcome the crisis. There are less­ons here for everyone. For Prime Minister Narendra Modi and his cabinet colleagues, the MOTN sends a clear signal—the respondents are unhappy with the Centre’s performance over the past six months, even if they still see the Modi government as the best bet to resolve the issues facing the country. If an election were held now, the survey projects that the NDA will return with a clear majority but with a depleted tally, down from the 353 seats it won in the 2019 general election to 298 now—a drop of 55 seats. Worryingly for the BJP, the current MOTN projects that its individual tally coming down from the 303 seats it won in 2019 to 269, three short of a simple majority, implying that it might have to rely more heavily on its coalition partners.

There is also a steep drop in Prime Minister Modi’s popularity ratings. From an emphatic high of 74 per cent describing his performance as prime minister as ‘good’ and ‘outstanding’ in January 2021, the number is down to 54 per cent now. That said, a majority still repose faith in the prime minister’s ability to deliver. What should also be heartening for Team Modi is that the drop in seats is not as drastic as that projected for the Congress-led UPA government at the beginning of the third year of its second term in 2011. INDIA TODAY’s August 2011 MOTN projection showed a loss of 72 seats for the UPA, pushing its overall tally from 259 seats to 187, indicating that it would have lost power had a general election been held that year. Modi and the NDA need to heed the warnings of the current MOTN if they are to avoid the kind of ignominious defeat the UPA suffered at the end of their second term in 2014. The seven-year itch that afflicted the Manmohan Singh government stemmed from the flood of perceived scams and corruption charges against it besides the economic slowdown. For the Modi government, Covid’s second wave has dealt a devastating blow to the health of the nation and the economy, a concern that the findings reflect. While Modi was lauded for his handling of the first wave with a high 73 per cent approval rating in January 2021, the disruption experienced during the second wave has seen that figure drop to 49 per cent.

While there is disapproval of the NDA government’s handling of the second wave, the political impact is less severe than what MOTN 2011 projected for the UPA. That is partly because the pandemic is seen not just as an Indian problem but one that has afflicted the entire world. Not just that, respondents hold both the Centre and the states equally responsible for the poor handling of Covid’s second wave. While those who believed the Centre handled the pandemic well slid from 67 per cent in January 2021 to 51 per cent now, the states too have registered a steep fall in their ratings—from 70 per cent in January to 55 per cent now. Moreover, when asked who was responsible for the people’s suffering during the second wave, 44 per cent blamed the central as well as state governments. Only 13 per cent said the Centre alone was to blame. 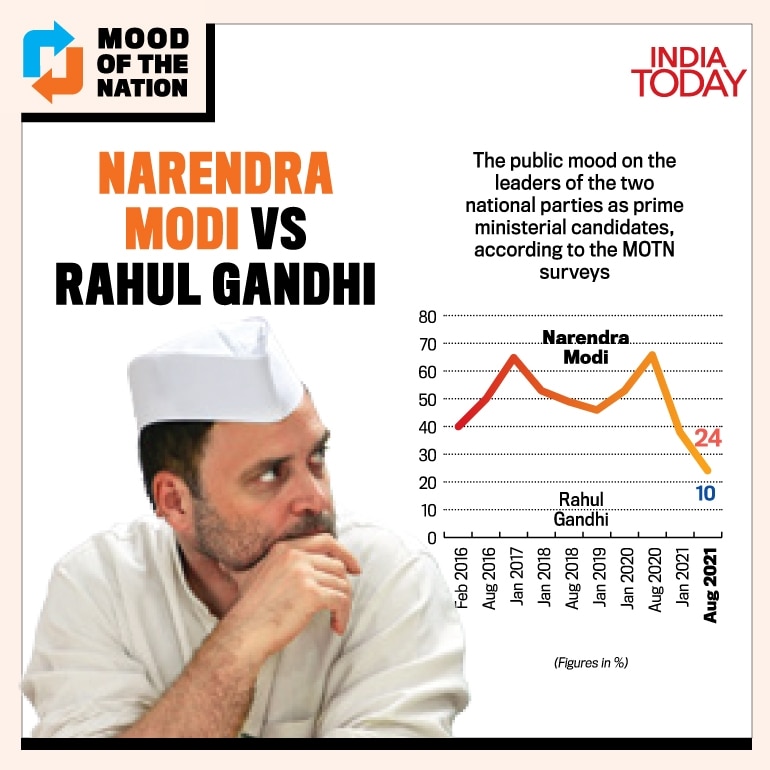 The real concern for the Modi government should be the MOTN finding that the economic distress in the country is widespread. Setting the economy right is as much of a challenge as taming Covid today.

Among the big achievements of the Modi government, building the Ram temple in Ayodhya and the revocation of Article 370 get a rating of 29 per cent and 22 per cent respectively. This shows that the BJP retains its core ideological vote bank that roots for an aggressive Hindutva. This is also why the BJP’s vote share is projected to dip by only three percentage points over the previous MOTN—from 37 to 34 per cent—despite the widespread discontent (over Covid and subsequent economic stress) across the country. The gap in vote share between the BJP and Congress, the main opposition party, remains a high 14 per cent.

That its core voters are still with it may be heartening for the BJP but alarm bells should ring on what MOTN August 2021 registers as the Modi government’s biggest failures. Rising prices and unemployment are right on top, flagged by 52 per cent of respondents. Clubbed with other economic concerns, such as the farmers’ protests, the number balloons to 76 per cent, which is a massive thumbs down for the Centre’s economic performance. Worse, all four regions of the country share this perception. Respondents also reiterated the sentiment when asked specific questions about each of these issues. For instance, 60 per cent feel the central government has not done enough to control inflation. And 59 per cent view the unemployment situation in the country as dire.

So, despite the perceived widespread discontent, why do Modi and his government still have public support? The easy answer would be to point to the lack of a strong Opposition against the prime minister. The current MOTN projects a one percentage point increase in vote share for Congress from the 19 per cent in its previous edition. The drop in BJP’s vote percentage has gone to the other opposition parties, which remain fragmented. Respondents remain divided over whether a united opposition can take on Modi, with 49 per cent saying yes and 43 per cent answering in the negative. So, Modi’s dominance on the political stage, though somewhat diminished, remains robust. The TINA (there is no alternative) factor continues to work for Modi.

This is because, so far, the Opposition parties have not come up with a convincing alternative narrative that can upstage the prime minister and his party. This remains the Opposition’s biggest challenge. Among the non-Congress leaders most suited to lead an opposition alliance, the current MOTN reserves the top slot for Arvind Kejriwal, followed by Mamata Banerjee and then Akhilesh Yadav. But Kejriwal and his party are yet to extend their imprint beyond Delhi. Mamata’s stature has risen after her decisive victory in the West Bengal assembly election earlier this year, but she must now develop a pan-Indian appeal. Rahul Gandhi perhaps remains the best option for the Congress, but his own ratings have not picked up significantly.

68% of respondents say the Modi government’s biggest failure has been on economic issues, including rising prices, unemployment, demonetisation and slow economic growth

There are other reasons why Modi remains the top seed in the current MOTN rankings. Though the ferocity of the second wave exacted a deadly toll, the econo­mic damage is perceived to be not as bad as the first. The Modi government seemed to have learnt its lesson well and resisted imposing a national lockdown during the second wave despite mounting pressure. It kept the wheels of the economy running, even if at a slower RPM. There will still be a dip in the projected GDP but all major indicators such as capital expenditure on infrastructure, foreign direct investment (FDI) and revenue collection (barring a blip in June) have moved briskly in a positive direction. With good back-to-back Kharif and Rabi harvests in 2020-21, rural distress is not as pronounced. Covid, in fact, wreaked heavier damage on the metros­­ in terms of deaths and hospitalisation than it did in rural areas. As for foreign affairs, despite major Chinese intrusions on the border, the Modi government appears to have handled public perception well, with MOTN respondents backing its efforts.

Without doubt, the most important reason for the continuing faith in the NDA government is simply Modi. Both in terms of the strong leadership he provides and in his sustained focus on key development issues since he came to power in 2014. To Modi’s credit, he has ensured that, unlike most politicians, his vision is not restricted to the short or medium term. Instead, he lays out long-term goals, to which the country can aspire. The major development schemes for the poor, whether toilets for every household, banking for all, financial support to farmers and young entrepreneurs, electrification of villages, houses for the needy, and now installing potable drinking water taps in each house, they have left a deep and lasting impact.

Even during the pandemic, despite businesses cribbing about the Centre’s inadequate financial aid, Modi was categorical that he will not dispense doles but invest money in areas that would give tangible yields. Union finance minister Nirmala Sitharaman’s Budget 2021 proposed a slew of bold reforms, including a strong push for privatisation and relaxation of FDI norms in major sectors. There was also a massive commitment to public sector disinvestment and the monetisation of government assets.

However, jobs and inflation are two issues the Modi government needs to address urgently, given that our MOTN survey shows that these remain a primary concern. The massive investments in infrastructure and development projects, whether building roads or providing water, do have the potential to generate jobs on a large scale. For the ailing MSME (micro, small and medium enterprises) sector, the government has not only eased credit access but also extended support to start-ups and ventures for the young to encourage entrepreneurship.

Yet, the Modi government is perceived to be not doing enough. It must now deliver on all the promises it made during the budget to kick-start much needed economic growth. 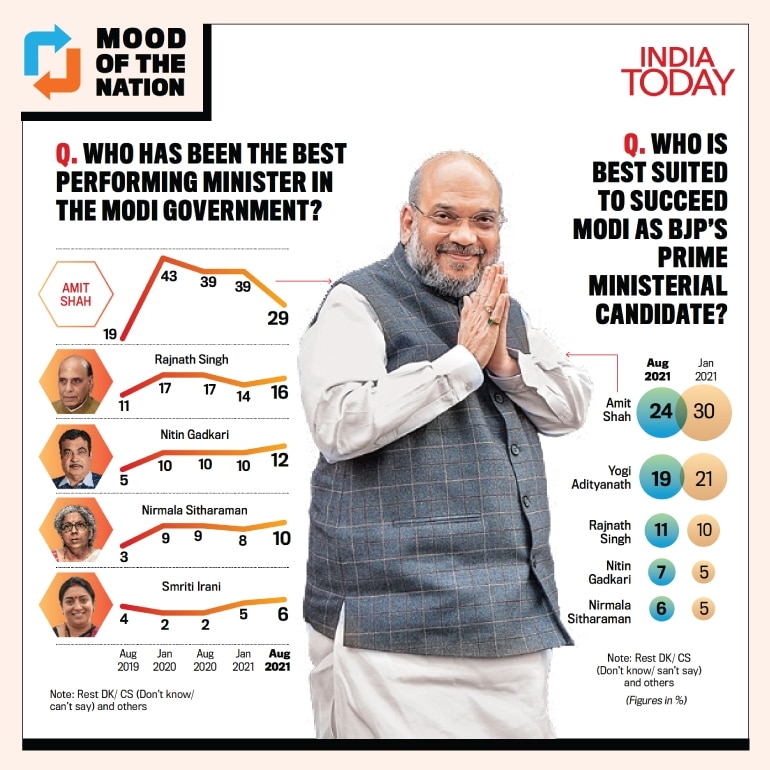 Those who know Modi say the prime minister remains fully in charge, is decisive in his actions (the swift end to retrospective tax being a case in point), retains an eye for detail and an impatience to get thi­ngs done (witness the recent bold cabinet additions, exits and reshuffle). But the crisis he confronts is humongous and it will require all his leadership skills to steer the nation through the health and economic tsunami. Sci-fi novelist Brandon Sanderson once wrote: “The mark of a great man is one who knows when to set aside the important things in order to accomplish the vital ones.” Modi has a penchant for it. Let’s hope he continues to do so.

The India Today Mood of the Nation (MOTN) poll was conducted by Karvy Insights between July 10 and July 22, 2021. Due to the Covid-imposed limitations, a mixed methodology was adopted—50 per cent face-to-face and 50 per cent telephonic interviews. A standard structured questionnaire, translated into regional languages, was used. A total of 14,559 interviews were conducted, 71 per cent in rural and 29 per cent in urban areas, spread across 115 parliamentary and 230 assembly constituencies in 19 states—Andhra Pradesh, Assam, Bihar, Chhattisgarh, Delhi, Gujarat, Haryana, Jharkhand, Karnat­aka, Kerala, MP, Mah­arashtra, Odisha, Punjab, Rajasthan, Tamil Nadu, Telangana, Uttar Pradesh and West Bengal. In each assembly constituency, a fixed number of interviews were conducted. The fieldwork was conducted under the supervision of Ranjit Chib, chairman of Karvy Insights, assisted by vice-president Ginto Kannoth and his team.