Livdose
Home News Politics NHS 3% pay rise in England: For all the unions’ protests, the... 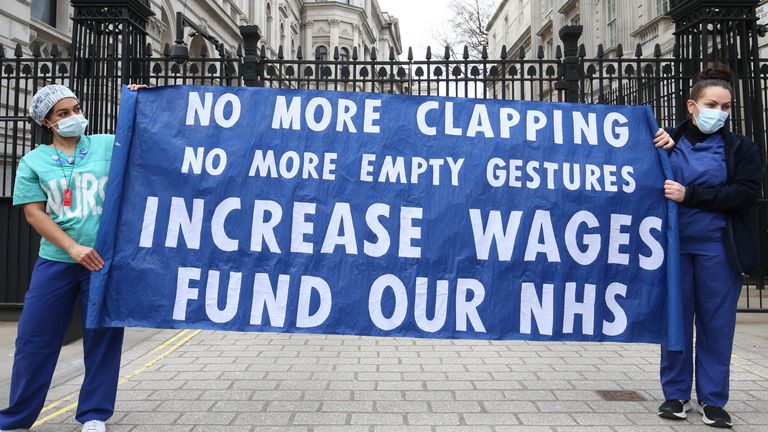 
The normally moderate Royal College of Nursing described the 3% pay rise for NHS staff in England as a “shambolic announcement” after a “shambolic day”.

And it’s difficult to disagree.

Really? So what happened in those four hours?

Was there an almighty battle behind the scenes in Whitehall over whether to accept the review body’s recommendation in full? Perhaps.

Or, more likely, did the government want to avoid questions from MPs as the clock ticks towards parliament’s summer recess?

If that was the reason, it will almost certainly backfire.

Speaker Sir Lindsay Hoyle will either grant an urgent question or allow questions on pay during the COVID-19 update statement on the day the House of Commons rises.

The government will be relieved that the review body didn’t recommend any more than 3%. But is it a fair settlement?

The RCN makes the point that the Treasury expects inflation to be 3.7%. And the Scottish government has awarded NHS staff 4%, backdated to December. England’s 3% is only backdated to April.

The health workers’ union Unison conceded that the 3% is an improvement on the government’s earlier “miserly 1% proposal”. But it falls short of what NHS staff deserve after the pandemic, the union claims.

And that’s the point.

Many NHS staff will feel that all that Thursday night clapping by Boris Johnson and Rishi Sunak was worthless and a proper reward would have been an inflation-plus pay rise.

As for other public sector workers, Labour has attacked the proposal for “an insulting real terms pay cut” for police officers, who are to receive 2%.

And the TUC’s Frances O’Grady says the NHS announcement should be followed by pay rises for all key workers. Good luck with that, Frances.

A 3% pay rise may not satisfy the unions – but at least the government has moved on from its claim that 1% was all it could afford.

It’s a compromise, therefore, between the double-figure percentage claims of some unions and the chancellor’s entirely predictable determination not to let public sector pay rip.

So, for all the unions’ protests, the award could have been worse.