Livdose
Home Lifestyle Fashion Oxygen Langar: How a social group is beating oxygen crisis with an... 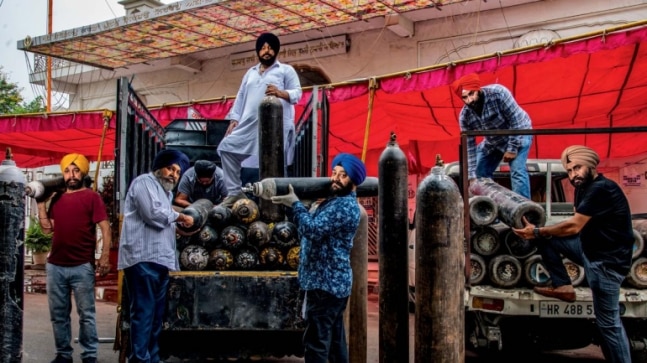 
On the night of April 22, Gurpreet Singh Rummy, along with four fellow social workers, stood outside the Shri Guru Singh Sabha Gurudwara in Indirapuram, Ghaziabad, the streets around him a dystopian nightmare of death and helplessness. The 49-year-old president of Khalsa Help International (KHI), a social help group formed during the Covid lockdown in March 2020, was attempting to administer medical oxygen to a 55-year-old semi-conscious woman whose oxygen saturation level had dipped to 56 per cent. Reviving the woman not only meant they had saved a life, but also that they were one step ahead in putting into action an audacious plan to distribute free oxygen among Covid-19 patients right on the road.

It was something they had been planning for a week after watching hospitals turn away patients wheezing from lack of oxygen. With a prayer muttered under their breath, they administered the medical oxygen and after a tense 45 minutes, as her oxygen level hit 90 per cent, their confidence level shot to a 100. They posted a video of the incident on Facebook and by next morning, over a 100 vehicles with Covid patients in need of medical oxygen had lined up outside the gurudwara. Armed with 12 large oxygen cylinders, the 90-odd KHI volunteers got to work.

The challenge was to maintain a regular supply of oxygen. For this, the KHI reached out to oxygen plants located as far as in Baddi in Himachal Pradesh, Haridwar in Uttarakhand, Jaipur in Rajasthan and Ludhiana and Rupnagar in Punjab. Vehicles moved round the clock to ensure timely refilling and subsequent delivery of oxygen cylinders to the gurudwara, sometimes reaching the volunteers literally minutes before supply ran out. “Unlike with food there was no scope of delay here,” says Rummy. “Lives hinged on it. There was tremendous risk involved.”

Within two days, the daily number of patients coming to the gurudwara began to exceed 400. KHI volunteers, improvising on the go, began using plumbing pipes to administer oxygen to 10-16 people simultaneously from one cylinder. Around 30 beds were set up within the gurudwara to aid the KHI’s efforts.

The langar continued till May 14. According to KHI, they helped revive around 15,000 Covid patients in those 22 days. Of these, nearly 7,000 had arr­ived with their Oxygen levels as low as 50 to 60 per cent. The oxygen langar has now been shifted to the Krishna Dental College in Mohan Nagar, Ghaziabad.

With the virus spreading in rural areas, KHI is also setting up an oxygen langar in Kashipur, Uttar Pradesh, to maximise their reach and take their services to where it is needed most.

I Want What They Have: Tara Davis and Hunter Woodhall

Blake Lively, We’ve Missed You On the Red Carpet!

The ‘White Lotus’ Kids Are More Than All Right. They’re the Best Part of the Show