But no matter how she maneuvers from now until then, a new problem emerges. If, by that date, the House and Senate have not approved a separate, $3.5 trillion package to expand the social safety net, progressives have vowed to sink the infrastructure bill crafted by a bipartisan group of centrists.

Yet there is little chance both chambers can reconcile their vast intraparty differences to pass the $3.5 trillion package within the next eight days, especially given the constraints of shepherding a bill of this magnitude through the legislative process, according to multiple senior Democrats.

“There’s always a possibility that the vote would get delayed. But the question is, are we going to work to get to our goal for September 27? Yes. We are going to work hard to reach that goal,” Democratic House Whip Jim Clyburn, the No. 3 House Democrat, said on CNN’s “State of the Union” on Sunday. “Sometimes you have to kind of stop the clock to get to the goal. We’ll do what’s necessary to get there.”

Top Democrats, however, have reassured House members that they are still committed to holding the vote on the 27th, sources with knowledge of the matter tell CNN.

On top of the September 27 deadline for the infrastructure package vote, Pelosi has to decide whether to wait until moderate Sens. Joe Manchin and Kyrsten Sinema sign off on what they can accept in the sweeping spending package, which the party plans to pass with only Democratic votes, or if she should ignore their demands and try to ram through the House a bill that is backed by liberals.

If she does go along with the progressives on the size and scope of that social spending package, known as the “Build Back Better Act,” she risks forcing moderates to cast a vote on a bill that could ultimately be pared back and changed dramatically in the Senate, effectively forcing them to cast a vote on an array of contentious tax-and-spending provisions that could become liabilities on the campaign trail next year.

“She knows how dangerous it is for our frontliners,” one moderate Democrat said of her party’s most vulnerable members. “Nancy is in a hell of a bind. But it’s her bind.”

‘Why would you have people walk the plank for the sake of it?’

Indeed, the next several days will test Democratic leaders and President Joe Biden’s legislative muscle as Washington Democrats settle in for a tedious and complicated negotiation that will force the party to agree on not just policy, but also navigate a delicate timeline that could be upset by any one faction of their party.

While it’s still possible one faction in the caucus will ultimately back down, both moderates and progressives are posturing to get leadership to cater to their demands. And how leadership ultimately responds remains to be seen.

“There is a strong argument for making as much progress as possible,” said Rep. Tom Malinowski, a Democrat from New Jersey whose seat is targeted by the GOP in next year’s midterms. “I completely understand the desire among some of my colleagues to make progress in parallel on the reconciliation bill,” he said, referring to the spending package that is moving through what’s known as the budget reconciliation process. “But I also don’t think given the progress, holding infrastructure hostage would be justified.”

Last week, key House panels completed their work in passing the $3.5 trillion bill out of committee, a sweeping plan that would expand Obamacare, boost the country’s paid family leave policy, extend the child tax credit and raise taxes on corporations and wealthy individuals in the country. By using the reconciliation process, Democrats can bypass a filibuster in the Senate and therefore pass it with just a simple majority of 51 votes.

But the expectation is it will still need to be changed significantly to pass muster with all 50 Senate Democrats and to win over the votes in the House, where Pelosi only has a narrow margin. For moderates in the House facing reelection in tough districts, the prospect of voting on anything that doesn’t have the blessing of the entire Senate is too risky.

Many Democrats recall the vote Pelosi forced them to cast in 2009 on cap-and-trade legislation to combat global warming — a controversial bill that became a major attack line on the campaign trial even though it never was considered by the Senate.

One moderate Democratic member who agreed to talk to CNN on the condition of anonymity to discuss internal party dynamics told CNN they are confident that Pelosi won’t force a vote on the sweeping spending package that will be vastly different than the Senate’s package, knowing that repeating the cap-and-trade drama would be an unforced error.

“Why would you make people vote on something when we have a four-seat majority? Why would you have people walk the plank for the sake of it? Pelosi shrewdly recognized that and made that commitment,” the member said, adding that other leaders have also suggested that wouldn’t happen.

What Pelosi pledged in August was that she’d hold a vote on the bipartisan infrastructure bill by September 27, just days before federal highway funding runs out. That deadline could help win over skeptical progressives, whose voters may be moved by the expiration of funding. She also pledged to “work with House and Senate Democrats to reach agreement in order for the House to vote on a Build Back Better Act that will pass the Senate.”

The differences that remain

Despite the House finishing their committee work last week, the series of markups revealed some of the schisms that still remain among House Democrats. In the Ways and Means Committee, Rep. Stephanie Murphy of Florida was the sole Democrat to vote against the committee’s text, saying some of the provisions gave her “pause,” as did the overall process. 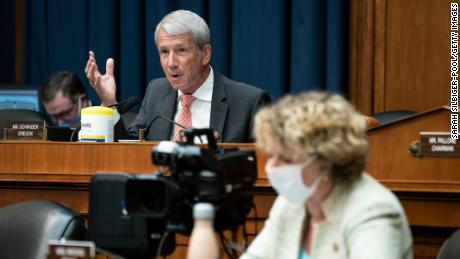 In the Energy and Commerce Committee, three Democrats voted against a provision that would have lowered the cost the US government pays for certain prescription drugs. The provision is seen as a huge revenue raiser for Democrats’ proposal, but has faced an uphill battle in both the House and Senate where members who have large pharmaceutical companies in their districts and states have argued the provision goes too far and would have a negative impact on innovation.

With no Republicans expected to back the larger spending package, Democrats cannot afford to lose more than three votes in the narrowly divided House. And prescription drugs is just one issue that could lead to Democratic defections.

The disagreements over how much to increase taxes on businesses and the wealthy are also expected to be a bruising fight.

Behind the scenes, House Democrats from high-tax states have also been deeply engaged with their Senate counterparts on their effort to repeal the cap on the State and Local Tax deduction that was passed in the GOP’s 2017 tax bill. That cap only allows Americans to deduct up to $10,000 in state and local taxes on their federal returns.

For several House Democrats from high-tax states, the SALT issue has been the one area that they say would cause them to vote “no” on their party’s sweeping economic bill. However, many progressives, who argue the wealthy should be taxed at a higher rate to cover the cost of the bill, have push back on efforts to do away with the cap. They argue that doing so would be a boon to wealthy Americans who would then be able to deduct more from their federal taxes.

The negotiations are still taking shape in many places. In the Senate, aides tell CNN that the caucus is still laying out where members stand. And while the White House has been deeply engaged for months with Manchin and Sinema on the package, there is little indication the President has been able to change their minds on issues like how much the bill should cost.

Instead, the next week will be a crucial indication of just how much Biden can accomplish in a narrowly held House and Senate, and it will be complicated by a set of deadlines to fund the government by the end of the month and raise the debt ceiling sometime this fall.