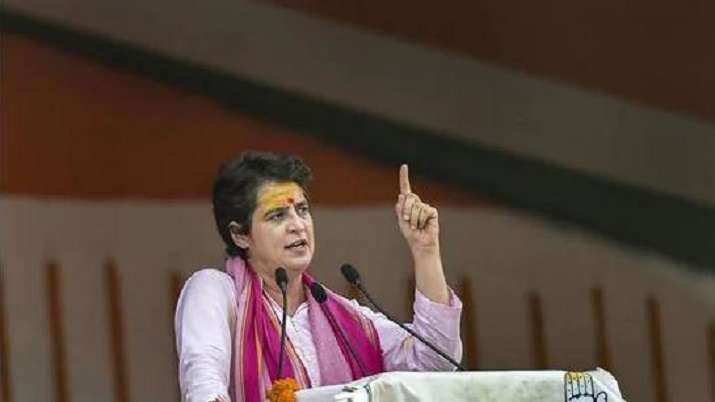 Congress leader Priyanka Gandhi Vadra on Sunday invoked Goddess Durga and urged the audience to chant ‘Jai Mata Di’ as she addressed a rally in Varanasi, one of the holiest cities of Hindus and the parliamentary constituency of Prime Minister Narendra Modi.

“I am on fast and I will start my speech with the ‘stuti’ (prayer) of Maa,” she said at the public meeting held to express solidarity with farmers in poll-bound Uttar Pradesh.

The Congress general secretary recited two shlokas in Sanskrit and urged the people to chant ‘Jai Mata Di’ with her to which the audience reciprocated. She also ended her speech with the salutation ‘Jai Mata Di’ and greeted the people on the festival of Navratri when Goddess Durga is worshipped.

Priyanka Gandhi’s gesture is significant as the Congress has been projecting “Hinduism that is inclusive and secular” as a counter to the BJP’s Hindutva, which the opposition party has dubbed as a “political doctrine based on exclusion”.

As the public meeting started, Priyanka Gandhi, Chhattisgarh Chief Minister Bhupesh Baghel and other Congress leaders present on the dais chanted ‘Har har Mahadev’. It was followed by a reading of excerpts from the holy Koran and the Gurbani.

“The Congress under the leadership of Priyankaji will comprehensively defeat the demon power which has unleashed itself in various parts of the state,” UP Congress spokesperson Ashok Singh said.

Earlier, senior Congress leader and former Union minister Salman Khurshid, when asked as to how will the party counter the “BJP’s Hindutva”, said, “‘This is a Hindu majority nation. Uttar Pradesh is a Hindu majority state. You cannot honestly believe that the majority must not have a voice in deciding how the state is run.”

“It will have a voice. But the majority’s voice cannot completely negate the minority. It cannot happen,” he said.

The Congress leader also said that his party has a campaign on Hinduism.

“Our Hinduism campaign is that Hinduism is inclusive, Hinduism is secular. And, therefore Hinduism wants to move hand in hand with other religions including Islam,” he told PTI.