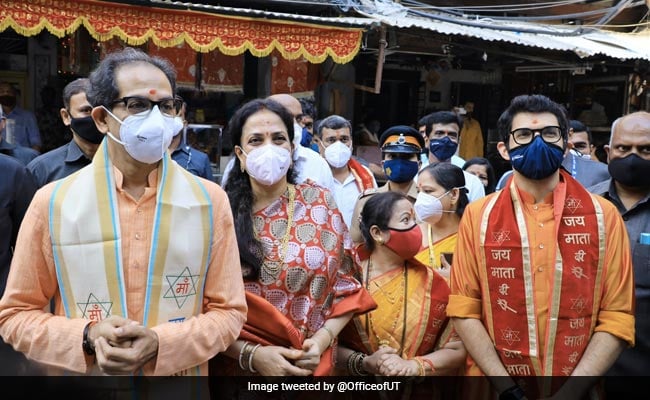 Mumbai: After remaining closed for nearly six months due to the COVID-19 pandemic, religious places reopened in Maharashtra on Thursday, with devotees seen visiting various temples and mosques in Mumbai and other places since early morning.

Chief Minister Uddhav Thackarey along with his wife Rashmi Thackeray and two sons Aaditya and Tejas visited the Mumba Devi temple in Mumbai around 8:45 am and offered prayer to the Goddess, as the reopening of religious places coincided with the beginning of the nine-day Navratri festival.

Since early morning, devotees were seen visiting various temples in the state capital Mumbai while adhering to the mask and social distancing norms.

Mosques in the city also witnessed a steady stream of the faithful since morning.

The Chief Minister and his family members, all wearing masks and following the social distancing rule, were there in the Mumba Devi temple premises for about half-an-hour.

Mumbai Mayor Kishori Pednekar was also present there along with the Chief Minister.

After offering prayers, the Chief Minister extended greetings to citizens on the occasion of the Navratri festival.

“It is the responsibility of all to observe health protocols at the places of worship in view of the COVID-19 pandemic,” he said.

The Chief Minister said he prayed to Goddess Mumba Devi to eradicate the coronavirus completely.

He said the trustees and priests of all places of worship should ensure that devotees follow discipline while offering prayers, and the shrine premises are cleaned and sanitised frequently and proper social distancing is followed.

“We can set an example in this regard,” he said.

He also praised places of worship like the famous Siddhivinayak temple in Mumbai for using QR code and other technologies to facilitate online darshan for devotees.

After the first coronavirus wave waned, places of religious worship were reopened in Maharashtra in November last year, but they were closed again for people after the second wave started in the state in March 2021.

For long, the opposition BJP had been demanding reopening of temples and other places of worship in Maharashtra. The party staged protests in August in several cities of Maharashtra in support of its demand.

The Maharashtra government last month announced reopening of all religious places from October 7 in the state with COVID-19 protocols, a move that comes amid indication that the second wave of the pandemic is ebbing.

Besides Mumbai, religious places in other parts of the state also reopened on Thursday.
In neighbouring Thane city, BJP MLC Niranjan Davkhare visited the famous Ghantali Devi temple and offered prayers to the Goddess.

A number of devotees, mostly women, dressed in traditional attire, were seen visiting the temple.

The Kopineshwar temple in the main market area of Thane city and the Lord Shiva temple in Ambernath town also reopened their doors for devotees early in the morning.

The temple managements provided sanitisers to visitors and ensured that social distancing was followed.

In adjoining Palghar district, the reopening of the Mahalaxmi temple at Dahanu and the Vajreshwari temple in Vasai were marked by musical performances arranged by temple managements.

Flower vendors and those selling other items for prayers expressed happiness at the reopening of religious places.

Sapna Mali, whose family earned a living by selling flowers outside a Ganesh temple in Thane city, said, “It is good that the temples have reopened, otherwise it would have been difficult for us to survive in these times.”

Last month, while announcing the reopening of religious places, Chief Minister Thackeray had urged people not to drop guard and continue COVID-19-appropriate behaviour in view of a possible third wave of the pandemic.

The government had issued standard operating procedures (SOPs) for devotees and officials managing places of worship to ensure strict implement of coronavirus-related protocols and curb spread of the infection.

These strict measures include non-distribution of ‘prasad’ (offerings), no sprinkling of holy water, no touching of statues, idols or holy books and staggering the number of visitors to maintain social distancing, a government order earlier said.

Face mask or covering of the face is mandatory while visiting religious places, it said, adding the minimum distance between two persons should be six feet.

The state government advised senior citizens, pregnant women and children below 10 years of age to remain at home.

The management of shrines should provide separate entry and exit points for devotees, if possible, to avoid crowding, said the order.

People should avoid physical contact while greeting each other, it added.

The Mumbai civic body issued an order last week capping the number of visitors to places of worship to 50 per cent of total capacity.