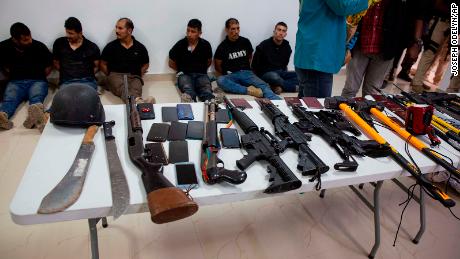 Matias Gutierrez, 45, told CNN he was contacted in early June by a fellow veteran named Mendivelso Gersain, who put him in touch with another man — retired Sgt. Duberney Capador — recruiting a group of private security guards to travel to Haiti.

Capador told the men he was working for a US-based company and created a WhatsApp group to coordinate the recruitment effort, Gutierrez alleged. The logo of Florida-based firm CTU Security was added as the icon of the WhatsApp group, which, Gutierrez said, at some point had more than 250 people in it.

“They only mentioned a company based in the US, and a job as private security in Haiti. Security for the President of Haiti, who was believed to be under death threat,” Gutierrez told CNN.

Colombian police had already named CTU Security as the recruiter for the Haiti operation, but their Haitian counterparts believe a Haitian-born American, Christian Emmanuel Sanon, had hired CTU to recruit the 26 Colombians, characterizing them as mercenaries, as well as two Haitian-Americans.

CTU Security is headquartered in the Miami area and run by a Venezuelan man, Antonio “Tony” Intriago.

CNN has tried repeatedly to contact CTU Security since Saturday and has been unable to identify contact information for Intriago. Colombian police say they are working with Interpol to provide information on Intriago.

On Monday, Colombian police also claimed that the airfares for 19 the Colombian men were paid with a credit card linked to a company based in Miami.

About a month after the first recruitment approach was made, according to Gutierrez, Moise was killed in his private residence in the early hours of July 7. Capador was gunned down in an operation by Haiti police shortly afterward, on the same day, and Gersain remains detained as one of 20 Colombians captured after the assassination.

Gutierrez told CNN he had been in contact with the recruited Colombian guards several times while they were in Haiti. They told him the job was to supplement the Haitian presidential guard.

According to the Colombian police, Capador travelled to Port-au-Prince on May 10 with another Colombian man, retired Capt. German Rivera. A group of 11 retired Colombian soldiers followed them on June 4. It’s unclear when Gersain arrived in Haiti.

At the end of May, Dimitri Herard, the Haitian chief of the General Security Unit at the presidential palace, also traveled to Ecuador through Bogota, according to the Colombian National Police. The force said July 12 that it is investigating whether Herard, while in Colombia, met with any of the Colombian nationals allegedly involved in the assassination.

Herard is currently under disciplinary measures in Haiti and was due to appear in court Wednesday, but he missed his appearance, citing “a precautionary measure ordered by the General Inspector of the Haitian Police,” according to a letter from Herard that CNN has seen.

Gutierrez, who works as a security guard for an oil company in Bogota, says he was attracted to the job by the good pay and the possibility to travel: “In Colombia, any job would pay you some three hundred USD, while this offer was for $2,700 per month, with food and accommodation included. I know people who are working right now in Dubai, Abu Dhabi, people in Kabul or Yemen, or even Syria. It was a similar job offer to those ones.”

Gutierrez told CNN he is part of a wide network of retired special forces and commandos who work as private security at home and abroad. Colombian veterans are highly sought by private security companies because of their combat experience garnered from sustained warfare among the Colombian state, left-wing guerrillas and paramilitary groups.

Capador’s sister told CNN her brother was also looking for a better salary abroad, saying he was struggling to get by on the state pension he received after 20 years of service in the Colombian army.

Gutierrez, as well as several relatives of other Colombians who traveled to Haiti, told CNN the accusations against the men do not add up.

“It was all a plot. How can you have this type of assassination and not have a single dead but the President himself? If my fellows had done the job, they would have had to enter the residence and kill the guards before killing the President. You would have seen a combat scene,” Gutierrez said.

Capador’s sister also told CNN she spoke with her brother in the morning on the day of the President’s assassination, and that he told her they had arrived too late and could not save the target they had been hired to protect.

She said she last heard from her brother on the afternoon of July 7, when he told her he was negotiating the Colombians’ surrender to the Haitian police, Capador told CNN, a claim CNN has not been able to independently verify.

After the news broke from Haiti, everything turned quiet on the WhatsApp group created to coordinate the recruitment effort, Gutierrez claims.

“Our group was called ‘First Flight.’ They created other groups because there were more than 250 people in that group, and they could not add more. Then everyone left. There’s less than 50 people in it now.”

Gutierrez said he felt the fact that there were so many people on the WhatsApp group suggested that the operation was nothing untoward.

“You don’t do that if you need to kill somebody,” he said.

“I’ve done those operations when I was in the military, and they would send a commando to kill a guerrilla leader or something similar. You’re never more than eight people. Eight is the maximum, because otherwise too many people make the operation harder. This time they were adding more and more people.”

His thoughts, he says, are for the families of the detained guards: “They didn’t even receive their first salary, they had just got there. Now this happened, and probably the Colombians are going to be charged. Who knows when they’ll see them again.”