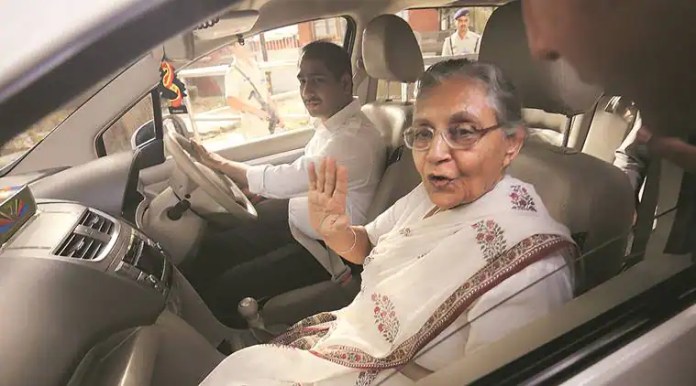 Sheila Dikshit after meeting Sonia Gandhi at her residence in New Delhi on Thursday. (Express Photo by Anil Sharma)

Former Delhi Chief Minister Sheila Dikshit Thursday met Congress president Sonia Gandhi even as sources in the party indicated that the high command is pondering over giving her a prominent role in Uttar Pradesh, where Assembly elections are due next year. Sources said the party is exploring various options and was nowhere close to a decision.

Dikshit, 78, was a three-time chief minister of Delhi. She is the daughter-in-law of prominent Congress leader from Uttar Pradesh Uma Shankar Dikshit, who had served as Union minister and Governor. Prashant Kishor, who is designing the Congress’s campaign strategy, had suggested that the Congress project a Brahmin face.

The party high command has already made it clear that it would project a chief minister face. Besides, it has indicated that Priyanka Gandhi Vadra would campaign outside Amethi and Rae Bareli for the first time. Sources said the party would, in the days to come, replace state Congress chief Nirmal Khatri. Party veteran Pramod Tiwari, young face Jitin Prasada and former MP Rajesh Mishra are said to be the frontrunners for the post.

While the Congress central leadership indicated that Priyanka would have an enhanced role in campaigning, Punjab Congress chief Amarinder Singh said he would request Priyanka to campaign in his state. “I would certainly request her to spare time for Punjab. I would like Priyanka to come,” he said. He also said Sonia would soon make way for her son Rahul Gandhi, and generational change in the party was inevitable. However, he stressed the timing was important.

“You can’t change everybody overnight… There has to be gradual replacement… Sonia Gandhi wants to take a back seat and wants to put Rahul and Priyanka in front. That change is coming about. Change is happening, I am sure,” he said.