Livdose
Home Lifestyle Fashion The new days of disco
Facebook
Twitter
Pinterest
WhatsApp
Linkedin
Telegram
Digg
Naver
Climate Week had just begun in New York when seemingly half the fashion journalists, retailers and related style professionals in the city boarded a Delta flight to Milan — most for the first time since February 2020, just before the world came to a virus-induced halt. Despite all the talk that has been going around about sustainability in the industry, especially once the pandemic spurred calls for a reassessment of old practices, no one mentioned carbon credits. People were too busy being excited and a little freaked out about traveling again.

“It’s unnerving,” Jonathan Anderson said via Zoom earlier the same day. He wasn’t talking about flying, but rather “this idea it should all go back to the way it was before.” The two are not unrelated. He was explaining why he had decided to skip putting on a show for his JW Anderson brand, and also more broadly, what fashion represents: an attempt to distill the mood of the moment.

“How can we come out of this pandemic not changed?” Anderson said. “I didn’t want to rush.” 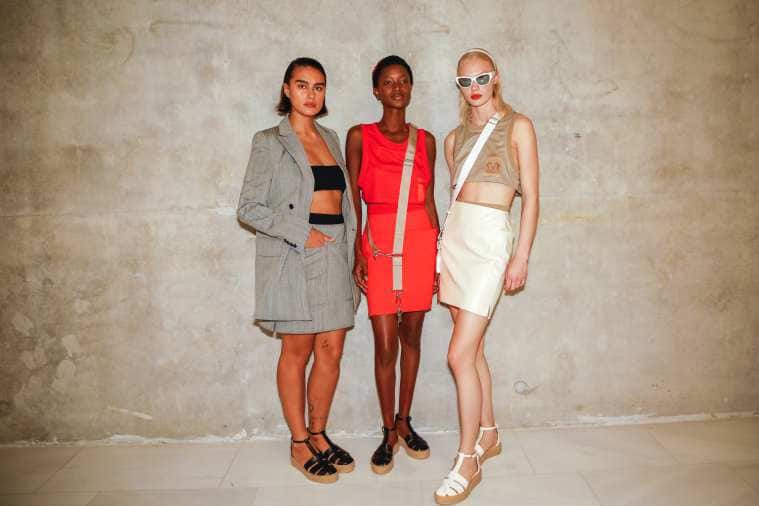 Models backstage during the Max Mara, spring 2022 show during Milan Fashion Week in Milan, on Thursday. (Valerio Mezzanotti/The New York Times)
Instead he created a sort of “Black Mirror” version of the Pirelli calendar — you know, one you hang on an actual wall — photographed by and starring a bikini-clad Juergen Teller, as well as the JWA collection of extreme ruffled knits, patent slip dresses with shoe-buckle straps and sheer lacy shirting, all set amid a tire plant.

Peekaboo ain’t what it used to be. There’s a lot that isn’t, really.

As the Milan shows began, however, kicking off the first full in-person European ready-to-wear season in a year and half, you wouldn’t know it.

It’s just so much easier — so much more fun! so much less of a downer! — to jump right back in at the deep end with clothes and street peacocking; to not wrestle with the irksome questions of what it means to sell stuff and espouse sustainability at the same time; to question motives and the willingness to change an entrenched system that for some is also extremely profitable.

It’s more fun to eat pasta and bask in the sun, because Italy is mostly open to those who can show proof of vaccination, and the Italians are being really good about wearing masks and, at least at shows, chairs are set up in a socially distanced way.

And honestly, watching Kim Jones’ first live show for Fendi was fun. A quasi ode to the new days of disco, it made dancing on the lip of a volcano — or a table, for that matter — look like a great idea. It made all those predictions about the coming era echoing the 1920s era, which inspired the ’60s and ’70s, into looks. Or lewks, really.

On the marathon Fendi runway at its HQ — the longest in Milan, according to the brand — Jones had built towering metallic arches, reflected in a mirrored wall to create an endless corridor of glam. And to better reflect slick tuxedo tailoring and caftans with a swirl of black brushstrokes; strapless pastel scarf gowns and cocktail dresses dripping tiers of silk fringe, even shearling chubbies, much of the collection etched with the pop art profiles of women drawn by illustrator Antonio Lopez between 1969 and 1972 (Lopez having been a favorite of former Fendi designer Karl Lagerfeld).

The faces came abstracted into intarsia squiggles in thigh-high leather boots and thigh-cropped leather minis; in mink with just a few polka dots of red lips; in lamé and silk; in a perceptual game of hide and seek. It was the lightest show in both mood and material that Jones has done since he joined the brand, and an unabashed invitation to party.

That’s also where Fausto Puglisi seemed to be going with his debut Roberto Cavalli collection: to some big imaginary bash in the wild kingdom, complete with leopard spots and tiger and zebra stripes. Often all in the same garment, spaghetti-strap gown or body-con mini or pantsuit, no matter — all the way down to the claw-heeled shoes. The brand does have a history of animal prints, so you can understand what Puglisi was thinking. Though it was also hard at this point to see so many animal prints and not think “Joe Exotic.” Which maybe suggests it was time to think twice.

At least when it came to the natural world, Alberta Ferretti stayed a little more abstract, using butterflies as a metaphor and crochet and macramé as a medium in an easy play on suiting and chiffon. 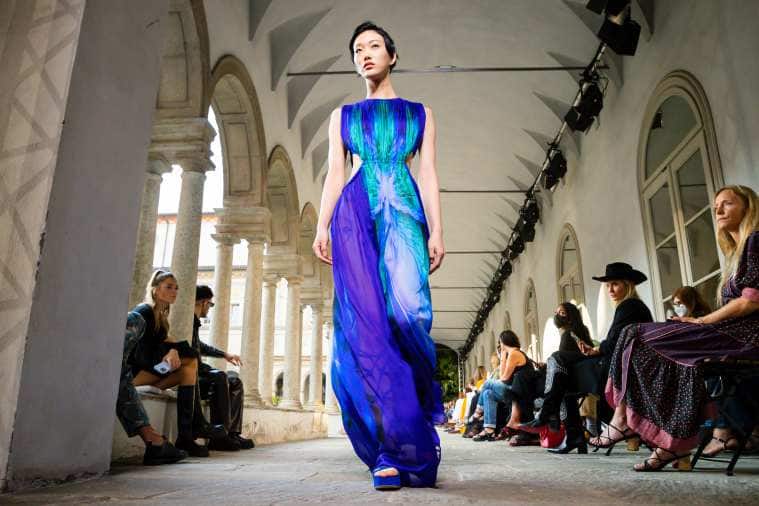 A model presents a look at the Alberta Ferretti, spring 2022 show during Milan Fashion Week in Milan, on Wednesday. (Valerio Mezzanotti/The New York Times)
It was Luke and Lucie Meier at Jil Sander, however, who fully engaged with the ambivalence between the gravitational pull backward and the niggling sense that it is necessary to rethink how things are done. Or worn.

(Max Mara summed this up as “luxury hotel existential” in their show notes, which on the runway meant athletic mesh and ’60s minis, dark denim printed with the brand’s name in ornate block letters and deck chair stripes, with luggage straps slung over all.)

Not so much in the oversize Sander tailoring — jackets cut to envelop, with a sort of exaggerated priest’s collar-cum-bandanna at the neck — or even the white shirts with their own built-in shirred corsetry hugging the hips. But in the combination of two puff-sleeved organza shift dresses embroidered with fuzzy pastel paisleys and sparkles like a fairy-tale nightie, and canvas painter’s pants. Hems already frayed.

“Tension is an energy,” the Meiers wrote in their show notes. Making it look appealing rather than confusing is a skill. It’s one way to take flight.