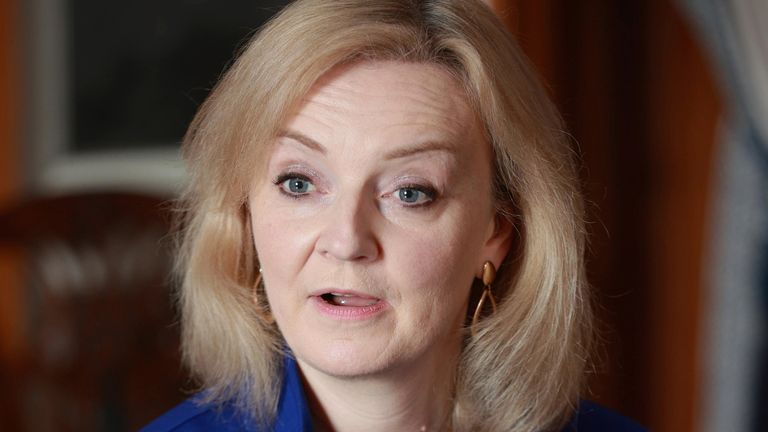 
Britain is exploring a radical new set of taxes on high pollution imports into the UK, the trade secretary has told Sky News.

In an exclusive interview, Liz Truss said that the government is considering introducing a carbon border adjustment tax if efforts to get an international deal combating climate change and carbon pricing do not succeed.

The comments come amid reports that such measures are now under active consideration across Whitehall.

Carbon border taxes, which are also being planned by the European Commission and by the Democrats in the US, involve imposing a charge on goods coming into the country based on how pollutive their manufacture was.

Speaking to Sky News in Glasgow, where the Department for International Trade’s advisory body, the Board of Trade, was meeting, Ms Truss said that her first priority was to try to tackle carbon leakage through the international trading system. But she said that if such efforts failed she would consider carbon border taxes.

“It is certainly something that we will need to look at in the future – if it’s the case that we don’t have the net zero targets agreed across the board, and if we can’t get an agreement at the World Trade Organisation,” she said.

“We know there isn’t significant carbon leakage at present. But as we see more countries adopt net zero targets, there is an increasing danger of carbon leakage over time.

While Ms Truss is thought to be less enthusiastic about these measures than some of her cabinet colleagues, her acknowledgement that such taxes are under consideration indicates that they are now a serious prospect.

Sam Lowe, a senior research fellow at the Centre for European Reform, said: “In the real world we have to appreciate the EU is moving ahead unilaterally with its own carbon border adjustment mechanism, and we’ve seen a proposal from the Democrats in the US this week, of something similar.

“There is also talk of Canada proposing a Carbon Border Adjustment Mechanism unilaterally as well and in that context I don’t think the UK can afford to put its head in the sand. It needs to engage with the world as it exists rather than how it wishes it to be.”

The idea of such a tax is also supported by UK heavy industry, which fears that it may be undercut by other countries with lower environmental standards in future. It also worries that its exporters may be impacted if the European scheme goes ahead without UK involvement or collaboration.

Andrew Large, chair of the Energy Intensive Users’ Group, said: “We entirely support the need for greener fair trade. And we want to make sure that UK manufacturers who have to bear the UK carbon costs don’t find themselves undercut by imports from countries that don’t match the UK’s carbon ambition.”