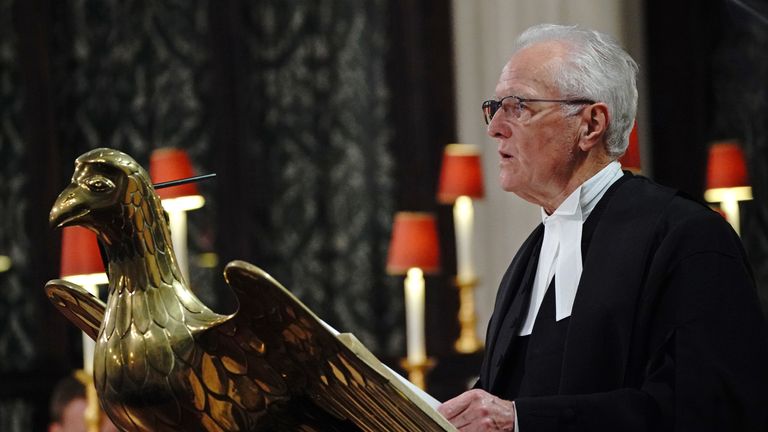 Parliament’s reputation is being put at risk by groups of MPs that can be funded by lobbyists, according to a rare joint letter from the speakers of both the House of Commons and Lords.

Parliament’s two most powerful figures called for a major overhaul in the way All-Party Parliamentary Groups (APPGs) operate in a letter – written on the day Sky News revealed the scale of business influence directed at these groups and published today.

Sir Lindsay Hoyle and Lord McFall have made an unusual joint intervention to try and stop the number of APPGs – which already tops 700 – from proliferating further.

They also want to make it tougher to set one up, as at the moment they can be created with minimum effort, calling for APPGs to publish accounts and more donation information than available at present.

The two speakers issued the warning following coverage earlier this month by Sky News – as part of the Westminster Accounts – about the issues with the way APPGs are currently regulated.

They said: “The current system has not prevented reputational risks to Parliament or the proliferation of APPGs.

“We consider our proposals would ensure that APPGs really commanded support from members and would increase transparency without overly increasing the burdens on APPGs, which can provide a valuable means for members to learn and engage on topics they consider are important.”

APPGs are informal interest groups of MPs and peers that facilitate cross-party work on an issue, a country or a sector, but Lord Pickles, the former cabinet minister and the chair of one of Westminster’s ethics watchdogs, has told Sky News they could represent “the next big scandal”.

The groups have received over £20m worth of funding from external organisations since the 2019 general election, with registered lobbying agencies dominating the ranks of the biggest benefactors.

MPs would have to approve any further changes to the rules governing APPGs, and it’s unclear whether they might resist further reforms.

Chair of the Standards Committee, Chris Bryant, said that they are determined to do another report on the issue by Easter.

Lobbying industry insiders have defended the role of APPGs in the democratic process as a “force for good” – but one conceded to Sky News “there are bad ones”, while another said a “minority” are funded by organisations “trying to unfairly influence parliamentary decisions”.

Gill Morris, the CEO of DevoConnect – which has provided £192,000 worth of secretariat services to six APPGs since the last election – told Sky News in an interview aired earlier this month: “There are really good APPGs and there are others where it’s quite clear that they are a direct point of access.

“I think it might be true [but] I think probably, most groups do things or operate the way we do.”

Sarah Pinch, a former president of the Chartered Institute of Public Relations, said the issue with APPGs was not about how they were funded, but the activity they undertook.

“I think there are a minority of APPGs that are funded by certain organisations who are peddling their line and they are trying to unfairly influence parliamentary decisions through a system that was not set up to do that,” she said.


David Lammy on the Westminster Accounts

In the letter Sir Lindsay and Lord McFall called for one person to be given the power to block new APPGs.

“We reiterate the view that there should be a defined gatekeeper role for such groups,” they wrote. “Mr Speaker has previously suggested that the chairman of ways and means could usefully perform this role in the Commons, though there could also be a place for joint Lords involvement in performing this function.”

They said the gatekeeper would make sure a new APPG would not duplicate existing groups before it is allowed to be constituted.

“It is of central importance that at the same time the applicant should also explain how and by whom the APPG would be funded,” the speakers added. “There should be more rigour about the AGMs of APPGs.

“We consider it should be a requirement that AGMs are chaired by a member of the panel of chairs (or potentially a Lords equivalent) from outside the APPG itself.

​”We consider there are sufficient personnel available to undertake this task, and to ensure the proper conduct of Annual General Meetings.

“AGMs should consider an annual report from the officers, as well as the accounts of the organisation. AGMs should not be considered valid if these were not available, and APPGs failing to meet this requirement should consequently be struck from the register.”

​They concluded: “We recognise that an increased level of scrutiny before APPGs are established could potentially give rise to an impression that the activities of a particular APPG are then ‘endorsed’ by both Houses of Parliament.”