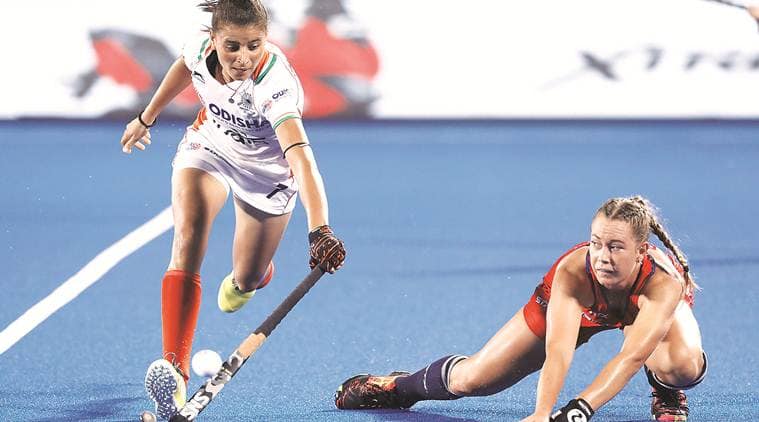 Sharmila Devi (L) runs past a USA player in first of the two-match Olympic qualifiers in Bhubaneswar. Indian players’ speed and strength came as a revelation. (Hockey India)

It wasn’t quite a sprint to Tokyo, as the first leg suggested it would be. But as the Indian women limped to the finish line, exhausting every ounce of strength to edge out the USA 6-5 on aggregate and qualify for the Olympics, they ended up inspiring the inspirer.

On Friday, minutes after India won the first match of the qualifiers 5-1, wrestler Vinesh Phogat tweeted: “If there is anyone I want to see doing really well at #Tokyo2020, it’s the Hockey India ladies. These superwomen are really amazing!”

For a team that has gone about its business silently for the last two years, there couldn’t have been a better compliment. After all, in their quest to rise from the lower echelons of world hockey, Vinesh has been one of the athletes they have all looked up to.

Playing rare games at home, India entertained a half-full Kalinga Stadium with their quick, hypnotising passes and speedy attacks; at least in the second half of both matches. It came as a revelation for most, as these traits have never been associated with women’s hockey. In their decades of struggle, India had forged a dubious reputation of being one of the most unfit teams in the world. Even at full throttle, they gave an impression of playing in slow motion.

Two matches in one weekend, however, seems to have changed that perception. Think of the blistering counterattack from Lalremsiami and Salima Tete deep into the third quarter of the first match; or Neha Goyal’s probing run on the right in the 51st minute of the second… the kind of stuff seldom seen from the team at these stages of the match in the past.

“Right now, our team is so fit that we can turn things around even in the last second,” captain Rani Rampal, who has been at the centre of the turnaround, says. “Two years ago, when Wayne (Lombard, the team physio) joined us, his first reaction was ‘oh my god, where have I landed!’ But he took it as a challenge and made it his mission to make us fitter.”

Lombard, who has worked with Indian athletes like Vinesh and javelin thrower Neeraj Chopra, was appointed as the women fitness trainer in 2017. The team he inherited was an eclectic mix: more than half of the players came from tribal areas in Odisha and Jharkhand, and rural Punjab and Haryana. Some hailed from Manipur and a few, like striker Lalremsiami, were from Mizoram (in fact, Siami, as she is known in the team, could not speak Hindi and carries a Mizo-to-Hindi dictionary even today).

This was a close-knit group, Lombard observed. But fitness as a concept was alien. And they were timid, which gave their opponents a mental and physical advantage in most matches. “Before I joined the team, I had asked around and one of the answers I got was physically they were really poor,” Lombard says. “Maybe, it was a cultural thing… they weren’t in the limelight that much and I think they also thought they did not have the authority to be in the limelight.”

The players, according to him, were shy to develop a physique. To draw them out of their shell, Lombard gave the players examples of other Indian women athletes who became world-beaters by developing a strong physique.

Vinesh, whose Rio Olympics ended in tears after getting injured, is currently among the fittest and strongest athletes in the country; the mix of bravado and strength earning her the nickname of ‘fighter plane’ among her friends. Lombard, who worked closely with Vinesh in the rehab phase after the 2016 Games, also cited the example Mary Kom, who recently won her eighth World Championship medal last month at the age of 36.

“Listening to their stories, we realised if they could be so strong and have such a great physique, why can’t we? If they can achieve so much with their fitness, even we can,” Rani says.

Once they bought into Lombard’s idea of fitness, the actual work began. It has taken two years of intense workout – gym sessions to increase strength, short sprints (20m) to improve endurance – for the team to match the world standards.

When Lombard had taken over, the average yo-yo test scores of the team were in the range of 17 to 17.5. In international hockey, 18 is considered to be the bare minimum (to put it in perspective, the men’s cricket team has a score of 16.1 as minimum). “When you are averaging 17, that means a couple of the athletes running an 18, and then the rest of running 17 or lower,” Lombard says.

In September, before the team travelled to England to face Olympic champions Great Britain in a test series, the average scores had improved to 19.5. “So everyone has to be above 18 and then a few players have to be about 20, 21 or 22. So yeah, so the improvement from that perspective has been pretty phenomenal,” Lombard adds.

Rani says: “Wayne works on minutest of details. He works late into the night studying our GPS data… which player is playing with what intensity, what distance they’ve run in a match, who should take more load, who should slow down a bit… Every morning we get the data on how much percent the body is recovering and then according to that our training schedule is charted out. All these things have brought massive changes.”

The impact of this has been visible on the pitch. The players have never looked stronger on the ball or so quick with, or without, it. There is a fair bit of distance to cover before India can match the European teams or Australia. But the win over the US gives them a solid base. “We have to do this for the entire match,” coach Sjoerd Marijne says. “And the preparation starts tomorrow morning.”

Need to work on finishing and deep defence: Men’s coach

PTI adds: Endeavouring to accomplish an “unfinished” task at the Tokyo Olympics, Indian men’s hockey team coach Graham Reid wants strikers with incredible finishing skills and a strongly fortified defence. “Obviously, I have an unfinished business. You always dream of an Olympics podium finish. I was lucky to win one as a player and those memories are things you hold on to,” said Reid after India confirmed their place at the Tokyo Games on Saturday.

Eight-time champions India qualified after thrashing Russia 7-1 in the second game to win the double-leg FIH Olympic Qualifiers 11-3 on aggregate at the Kalinga Stadium here. “That’s what we need to bring to this team and give it a big shot (in Tokyo),” the 55-year-old coach said. “I told the players just now that we have nine months (before Olympics). Just get better and better, that’s our plan. Focus on the process, result will take care of itself.”

Reid said his players will look to polish their game in the coming months. “I think for me what we need to get better in is finishing. We are creating a lot of opportunities, which is great. But we need to get more returns. Also in deep defence, we have to get tighter. We are still giving away too many opportunities (to opponents),” he said.

After opting out of the inaugural edition last year, India will make their debut in the FIH Pro League against the Netherlands in January next year. After Netherlands, India will host Belgium and Australia in February before embarking on overseas tours.

Reid believed playing against top teams will be handy for his side in its preparation for the Games. “That’s one of the things that Pro League does, that it sets up competition schedule between now and Olympics,” he said.