Livdose
Home Lifestyle Fashion Why Gross National Happiness matters more
Facebook
Twitter
Pinterest
WhatsApp
Linkedin
Telegram
Digg
Naver
A nation can be thought of as an enduring stage where human beings strive to experience transformation and reach a calm and peaceful state. Bhutan has dreamt itself to be in such a cherished stage. But such unfolding dreams are tested when faced with sudden adversity, such as the current pandemic. Taking care of the people means protecting the happiness of all. His Majesty, King Jigme Khesar, has shown us how to take care during this pandemic through an impressive and wholesome resilience programme. Neither lives nor hopes have been ravaged in the country, and this is a result of a collective consciousness of Gross National Happiness (GNH). Founded by his revered father, the fourth king, it remains a prescient agenda reflecting his social intelligence.

A nation can be thought of as an enduring stage where human beings strive to experience transformation and reach a calm and peaceful state. Bhutan has dreamt itself to be in such a cherished stage. But such unfolding dreams are tested when faced with sudden adversity, such as the current pandemic. Taking care of the people means protecting the happiness of all. His Majesty, King Jigme Khesar, has shown us how to take care during this pandemic through an impressive and wholesome resilience programme. Neither lives nor hopes have been ravaged in the country, and this is a result of a collective consciousness of Gross National Happiness (GNH). Founded by his revered father, the fourth king, it remains a prescient agenda reflecting his social intelligence.

GNH represents the holistic potential of our mind and body, and its path towards a deeper peace, calmness and happiness. It also reminds us of the multiple sources of suffering and pain, such as material deprivations, breakdowns of intimate relationships, personal traumas, and of the confusion between choosing means and ends.

A universal aspiration of all children is to grow up happily, then to live long and happily, and at the end, to face our mortality in peace. This is also part of GNH, but it is informed by the fact that we are living in an age where we are facing many larger-than-the-individual issues. From all probabilistic forecasts, the Earth as we know it is dying, having been crushed by the weight of human consumption, with its effects depleting the hitherto life-supporting biosphere. Thus, GNH is a tool for balancing—on the part of individuals and the government—between the extremes of materialistic maximisation of income or GDP (which is probably coming to an end of its unexpectedly long life anyway) and the intangible constituents of human wellbeing that go far beyond any metrics of market economics.

As a framework for thinking about public expenditure, GNH sets out additional areas that are normally neglected in development thinking such as psychological well-being, community vitality, balanced time use, environmental and cultural preservation, which are important in their own right. The happiness of human beings draws on vitalising relationships in flourishing communities, families and sentient beings with whom they reciprocate non-transactionally or non-commercially. People strive to transform their mental states towards generosity, trustworthiness, compassion and radiant lightness. At the same time, people are cultural and historical beings, perpetuating values, dialects, artisanal skills and identities that give them their dignity and esteem, and that moor and anchor them in a horizonless sea of change.

Cyclical rhythm is crucial for the wellbeing of human beings. People endeavour to balance their time use over a 24-hour cycle with voluntarism, with maintenance of physical activity and mental vitality, with meaningful work and, finally, at the end of a fulfilling day, with rejuvenating, sufficient hours of sleep. All of these and many more are acknowledged in GNH measurements, acting like a clear compass for society. The concept of the nine domains is central to GNH and its metrics. The nine domains are: psychological wellbeing, community vitality, time use, ecological diversity, cultural resilience, good governance, education, health and living standards. Obviously, there is interdependence and non-linear relationships between and among these domains. The GNH survey, which takes place every five years, collects information from a sample size of 8,000 households and is synchronised with Bhutan’s five-year plan. After crunching some 277 variables from the nine domains, the GNH index and indicators are updated. The family of GNH metrics is officially applied in five ways. It is used for: benchmarking targets in five-year plans, spatial budget allocation, policy screening, sectoral goal setting and evaluating corporate performance.

First, every index of progress is a national mirror to view how our own reflection has improved or deteriorated over time. Between 2010 and 2015, performance in 12 GNH indicators improved and so the overall 2015 GNH index improved. Indicators that showed positive change included the number of healthy days per month, sleep time, mental health, literacy rate, ecological diversity, electrification and road connectivity, housing and assets. Nevertheless, some indicators in psychological wellbeing domains dropped because negative emotions increased and positive emotions decreased. Likewise, the community vitality domain score showed a decline as the relationship of reciprocity through donation of money and time reported a decrease over those five years. 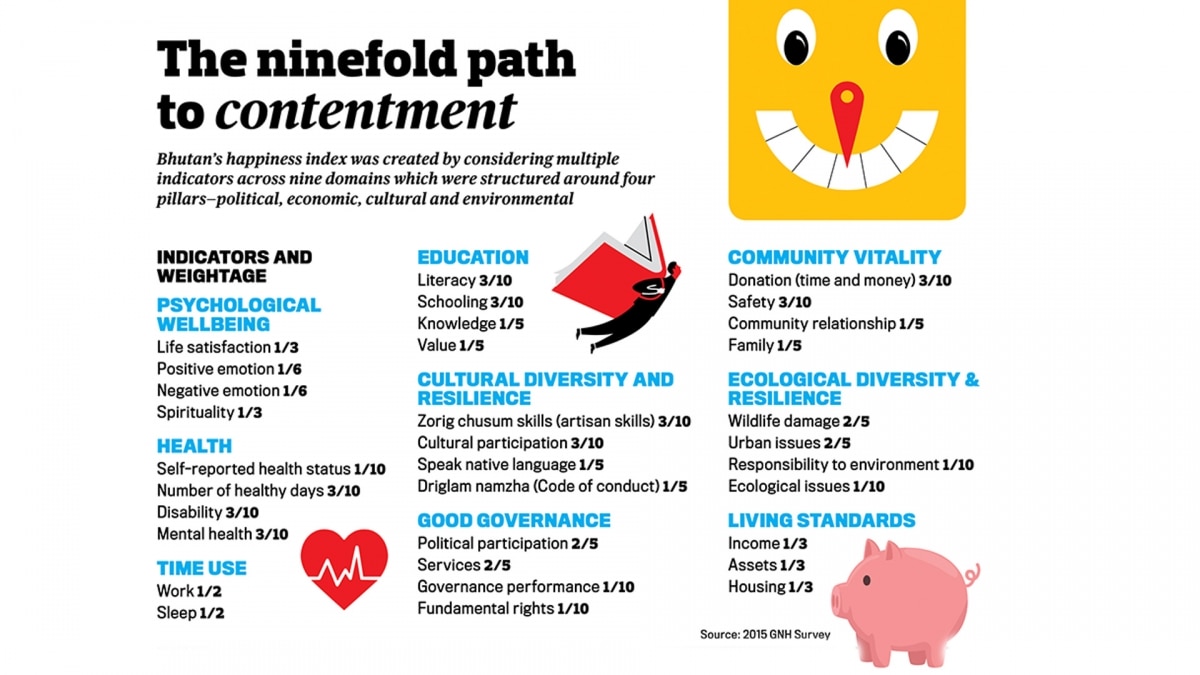 Third, central government policies are formulated after vetting with GNH policy screening tools, which have 22 criteria fulfilled through a well-defined process. Examples of these criteria are social support, leisure time, time for spiritual activities, cultural participation, values, gender equality, income equality, protection of rights, and stress. While screening a proposed policy, its likely impact on criteria is evaluated.

Fourth, the GNH index is used to evaluate big projects after implementation by comparing the impact of the project on beneficiaries versus non-beneficiaries in all nine domains of GNH. For example, the impact of a certain project was found the highest and statistically significant for living standards (i.e. income and assets) and community vitality. Community vitality increased amongst beneficiaries because the project design encouraged a village-wide cooperative approach. However, the project tended to reduce sleep time, thus affecting time use negatively. All over the world, time for sleep, time for friends, time for reflection, and time for helping others has tended to shrink. This is also an important concern measured by GNH.

But Bhutan also faces difficult choices. On the one hand, it embraces technology (mostly imported from India), which we can call the technology to improve living standards. On the other hand, Bhutan is deeply interested in the technology of happiness, which is largely a relational matter, between the person and his/ her inner self, and between a person and others, including other sentient beings and their habitat. There is a growing belief that the technology for living standards will bring ever-improved solutions to the problems humanity faces, including the happiness deficit. This might be another illusion. Bhutan’s GNH framework discerns and encourages both technologies—for living standards and for happiness.

– Dasho Karma Ura is president, The Centre for Bhutan and GNH Studies, Thimphu, and author of GNH and its Aims

Paris Hilton wore a dress made of toilet paper, and rocked it!

Katy Perry on Her Halloween Costume, New Campaign, and Etsy Finds for Her Daughter